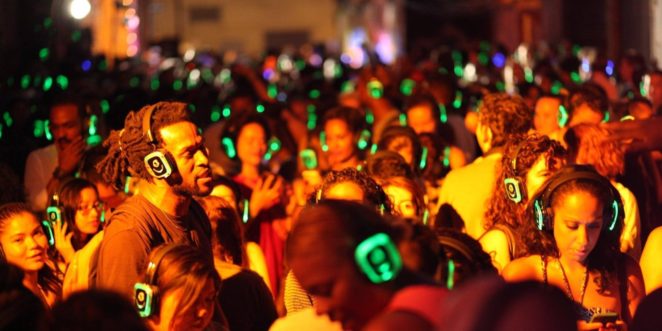 Silent disco is the new mantra of India’s party scene! It is the ultimate fad to hit the Indian arty market which has sparked interest amongst even the un-interested ones.

In fact, silent disco headphones can be seen as the best amalgamation of technology with entertainment. You get access to nonstop music irrespective of breaking any rules or causing any noise pollution and what more you can even select and listen to the song of your choice  ( if you are using 3 channel silent disco headphone).

Many people still credit it as something foreign and what “young kids would like to do.” However, if one takes a look, then silent disco wireless headphones have become more Indian than one could think of.

Since its introduction through the movie, Ae Dil Hai Mushkil and its now famous Breakup Song, silent party headphones on rent have become a must-have item for any party lover.

As a matter of fact, variations of the silent party including silent dandiya nights, silent Garba nights, silent movie marathons and even silent wedding sangeet nights are flitting through Indian markets. One can easily join in the fun irrespective of their age.

Here we are enlisting 7 obvious advantages of silent disco headphones and how one can fully use them!

#2. No longer queuing outside DJ to request your favorite song

The DJ can now accommodate up to 5 people at the same time. One can easily choose the station of their choice and dance away to their favorite music. DJ go home now you can party without him as per your condition.

Hire a silent disco equipment and you will not be breaking the government’s rule of no loud music after 10 pm. With the active noise cancellation system, the wireless silent party headphones don’t let any sound spill out or cause disturbance to anyone.

Be the first one to rent or buy silent disco headphones in your group and enjoy being a trendsetter. Soon, everyone would be following in your footsteps or should we say headphones! You’re just one step away from becoming a silent disco star.

#5. No need to search for party space

Because every place is a party place with silent wireless disco headphones and transmitters. All you need to do is set up the system with a DJ and bam! Your silent party can happen even in your living space!

You don’t have to use them just for dancing you know, you can also use them for your silent conferences or simultaneous interpretation system as well!

#7. An answer to noise pollution

With zero disturbance or sound spillage, silent disco headphones are the ultimate answer to the increasing noise pollution. It is a very eco-friendly method of having a party!

All the above-mentioned qualities can be found in single company headphones i.e. Translation India, one of the leading providers of interpretation and translation equipment and their hi-tech silent disco headphones.

These wireless headphones for silent disco are available at affordable rates for rent and buy from Translation India and say yes to new age style of partying in India!