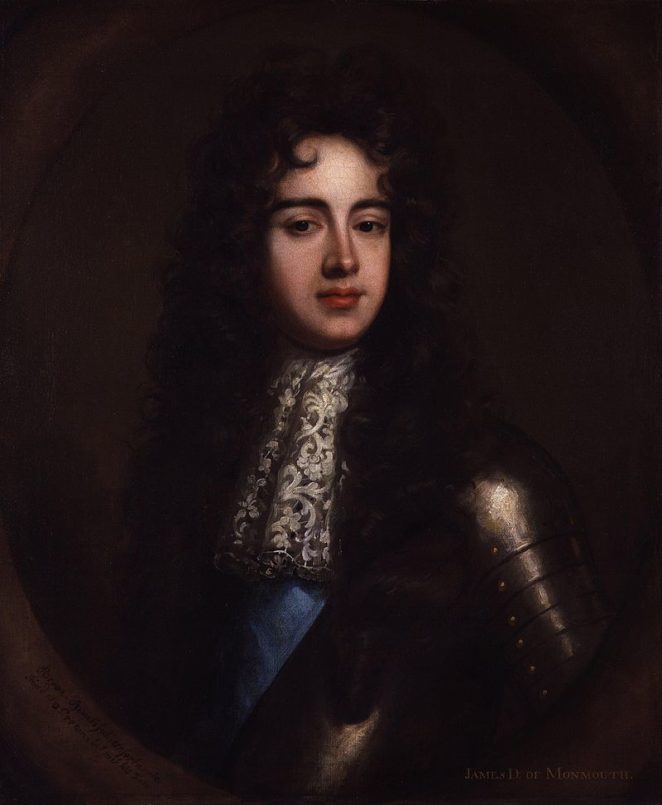 England became a republic for 11 years, with Charles only able to regain his throne in 1660. He reigned until his death in 1685, when his brother James became the monarch as King James II.

Charles had many mistresses and produced a large number of illegitimate children, of whom James Fitzroy was the oldest. However, Charles’s marriage to Catherine of Braganza was childless, which was why he was succeeded by his brother.

James Fitzroy was created Duke of Monmouth in 1663, when aged 13, and he was married at the age of 14, his wife being Anne Scott, the Countess of Buccleuch – he took his wife’s surname at this point.

James believed that he should have succeeded his father as king, claiming that his parents had in fact been married, although this was never proved. In any case, he saw himself as the chief Protestant challenger to his uncle James, who made no secret of his Roman Catholicism.

Monmouth was confident that he would be supported if he mounted an armed rebellion against King James and, on 11th June 1685, duly landed from The Netherlands at Lyme Regis, Dorset, with a small band of supporters. He gathered more support as he moved inland, but these recruits were poorly armed and completely untrained, many being farmworkers wielding pitchforks.

His army met that of King James at Sedgmoor, near Bridgwater in Somerset, on 6th July 1685, in what was to prove to be the last pitched battle to be fought on English soil. The battle was a short and bloody affair, with around 1,300 of Monmouth’s 4,000 men being killed. Monmouth fled from the battlefield, accompanied by a small band of supporters.

Their plan was to head for the port of Poole, in Dorset, from where they hoped to be able to escape by ship. They crossed into Dorset near Woodyates where they stopped at an inn, the landlord of which was Robert Browning, an ancestor of the poet of the same name. They split up at this point, leaving their horses behind.

Monmouth disguised himself as a shepherd and continued across country on foot. He had reached the village of Horton when he was spotted climbing over a hedge by a woman in a nearby cottage. A search was organized by local militiamen, one of whom spotted what he thought was a pile of old clothes in a ditch beneath an ash tree.

This was the Duke of Monmouth, scruffy and haggard. When searched, his pockets contained nothing but a few raw peas and the badge of the Order of the Garter that he had been given by his father back in 1663.

The spot where the Duke of Monmouth was captured has had the name “Monmouth’s Ash” ever since, and there is an ash tree growing there, although it is not the same one that Monmouth sheltered underneath.

The Duke was taken to Ringwood and from there to the Tower of London where he was beheaded on 15th July 1685.

King James took a savage revenge on the West Country yokels who had dared to rebel against his rule. After the “Bloody Assizes” at various locations in Dorset and Somerset more than 300 people were executed and many more were transported to the colonies.

One supporter of the Duke of Monmouth who escaped capture was the novelist Daniel Defoe, who had been one of the original people who landed with the Duke at Lyme Regis. He hid in a churchyard after fleeing from Sedgemoor and happened to notice a name on a gravestone that he thought was unusual and appealing. This was “Robinson Crusoe” – well worth mentally filing away for later use!