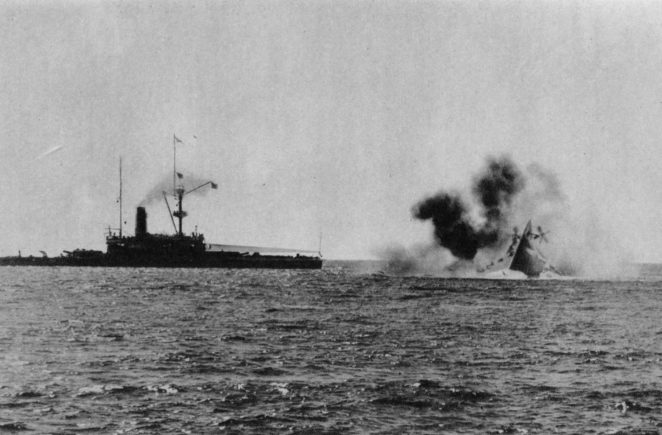 Vice-Admiral Sir George Tryon died on 22nd June 1893, at sea in the eastern Mediterranean. As he acknowledged shortly before going under, it was entirely his own fault.

Born in January 1832 into a wealthy Northamptonshire family who owned a country estate, George Tryon was educated at Eton and entered the Navy at the age of 16. His promotion through the ranks was rapid, although much of his experience was away from the sea. He became a Vice-Admiral (following a failed bid to enter Parliament and a post that gave him responsibility for coastguard buildings) in 1889.

As a Vice-Admiral during peacetime, his main responsibility was to direct “naval manoeuvres”, which in layman’s terms means “war games”. It was during one such operation in 1893 that disaster struck.

Tryon had a reputation for keeping his captains on their toes by issuing orders at the last minute and seeing how responsive they were. His aim, as he saw it, was to encourage initiative and quick thinking. It was unfortunate that these were qualities that he did not always demonstrate himself.

On the day in question, Vice-Admiral Tryon was aboard his flagship HMS Victoria at the head of a double column of eight battleships and three light cruisers. They were steaming in two rows about 1,200 yards apart.

Tryon gave orders that the two rows were to turn towards inwards each other in a complete 180 degree manoeuvre, after which they would steam in the opposite direction before turning at 90 degrees and coming to anchor.

There was one huge problem with this idea, which was that the turning circle of a battleship was at least 800 yards. This was pointed out to the Vice-Admiral by some of his officers, and he agreed to increase the distance between the columns to 1,600 yards, which would just be sufficient if the ships continued at their current speed.

However, not long after the new formation had been adopted, Sir George went back to Plan A. Just for good measure, he ordered the ships to increase their speed. It would now be impossible for the manoeuvre to be made safely. All the senior officers knew this, with the sole exception of Vice-Admiral Sir George Tryon.

He then raised a signal flag to order the ships to make the 180 degree turns. Rear-Admiral Albert Hastings Markham, who was in charge of HMS Camperdown at the head of the opposite column, had serious doubts about the order – which he knew to be unsafe – and he hesitated to obey it. Sir George sent a tetchy signal that was visible to all the other captains, to the effect of “what are you waiting for?”

So the turn was made. Knowing Vice-Admiral Tryon’s reputation for pulling rabbits out of hats, it might have been the case that everyone was expecting another order to come that would have saved the situation. But that was not the case.

HMS Camperdown hit HMS Victoria and tore a large hole below the waterline, causing Sir George’s flagship to sink in 13 minutes. Fortunately, none of the other ships in the column had followed the order as quickly as the two at the front and there were no other collisions.

Vice-Admiral Tryon went to the bottom along with 358 members of his crew. One of the 357 survivors was John Jellicoe, an officer who would later become Admiral of the Fleet and take charge at the Battle of Jutland in 1916.

So why did the disaster happen? There was an enquiry, at which various explanations were put forward. One was that Sir George made a simple arithmetical mistake. Another was that the intention had been for the columns to cross each other as they turned, with one ship passing behind its opposite number.

However, what was going on in Vice-Admiral Tryon’s head will never be known.