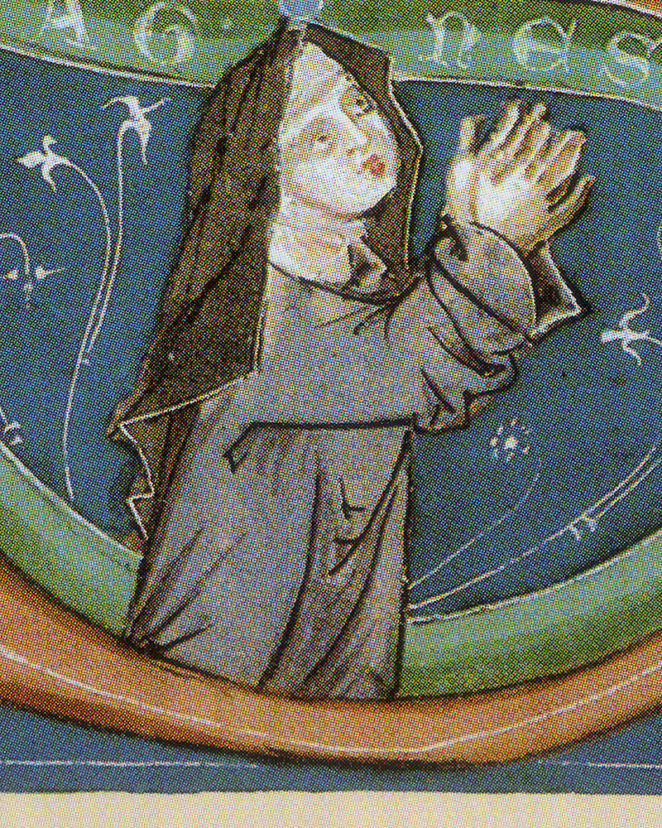 The image of Saint Agnes of Prague is from Wikipedia

Parton of: The Czech Republic

Agnes was born to Primislaus Ottokar I, King of Bohemia and Constance of Hungary on 20 Jun 1205. Her father was descended from Sts. Ludmilla and Wenceslaus, patron saints of Bohemia. Her mother was the aunt of St. Elizabeth of Hungary. She got her name because she was born on the eve of the feast of St. Agnes of Rome, an early Christian martyr. Her mother, tradition tells us, was extremely happy with her daughter because the infant appeared very serious and often folded her hands in the form of a cross. The child would remain quite still as if she were in a state of devotion.

As was the custom of the time, Agnes was betrothed to the son of the Duke of Silesia when she was three years old. As a result she was sent to the Cistercian convent at Trebnitz in Silesia. There she was educated by St. Hedwig of Andechs, the mother superior. Her fiance died three years after the engagement so Agnes was taken to the convent at Doxan in Bohemia. Although it was assumed by some that she would become a nun, many monarchs still tried to arrange marriages with her for their sons.

First was Emperor Frederick II of the Holy Roman Empire who wanted her to marry his son and successor, 10-year-old Henry. The young couple, she was eight by this time, was sent to the court of the German emperor. Agnes prayed that nothing would come of the relationship and the planned marriage did not come to pass.

Next King Henry III of England sought her as his wife which also failed and finally, Emperor Frederick II himself, whose consort had died. Agnes asked Pope Gregory IX to intervene on her behalf that she might enter the convent as a nun. The pope did so and her father accepted her life of celibacy.

Agnes heard of the Poor Clares, an order of nuns founded by St. Francis of Assisi for his friend, Clare of Assisi, and decided to establish a convent of this order in the capital city of Prague, the first of their convents to be located north of the Alps. With the help of her brother, she was able to accomplish this. Pope Gregory gave his approval and had St. Clare send five sisters from the convent of St. Damian in Assisi to Prague. They were joined by Agnes and seven other noble young women. She spent her time cooking for and repairing clothes for lepers and paupers. Her brother donated land and Agnes built a hospital on it.

Agnes soon distinguished herself by her virtue, prayer, obedience, self-denial and humility. Even though she did not want the position, Agnes became abbess at the command of the pope. She received permission to be known as “senior sister”.

Her brother sent her presents which Agnes refused because of her vow of poverty nor did she allow any of her fellow sisters to own anything personal.

Agnes was given the spiritual gift of miracles even restoring to life her brother’s daughter who had died.

Agnes passed away on 06 Mar 1282 after having spent forty years as a nun.