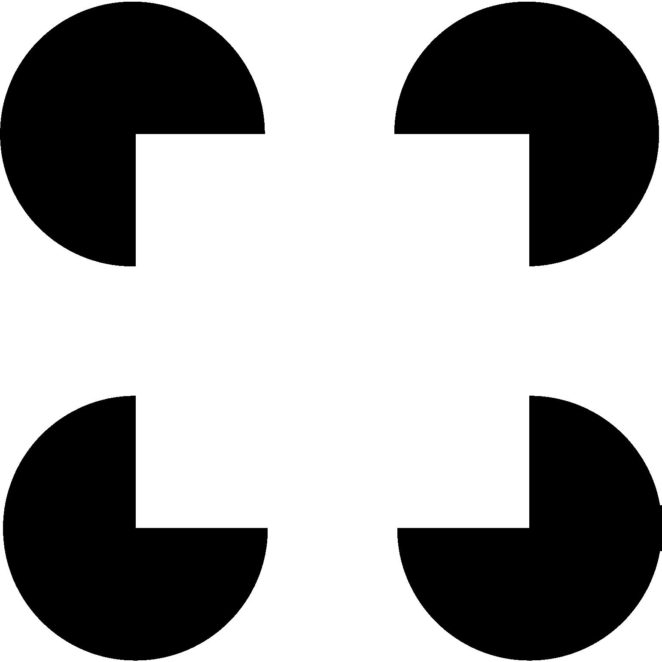 I found a reference to the typical Kanzia figure in my reading this morning of “The Science of Superstition” by Bruce M Hood. As you can see from the picture, there are four pies with a slice (roughly 1/4 of the pie) removed. I imagine they are, pecan, apple, pumpkin and banana cream pies. We can all see the pies and the missing slices but we can all see something that isn’t there. We make something out of nothing – a white square.

I am not sure where Hood is going with this idea because it caused me to pause, ponder and pursue a line of thinking. How often do I make something out of nothing?

I am sure that I can take offence when none is intended. I can string a long line of logic from a tiny thread and weave it into what I imagine is a beautiful tapestry. In the first instance, I now realize that I lose something by reacting without investigating. In the second, I might make something of value from the passing the shuttle through the loom and by noticing what shows up.

As a pattern seeking, confirmation biased species we are looking for ideas and processes that fit with what we want and what we want to believe. In the absence of contrary evidence, I can create windmills in the clouds (and bears, elephants, fish and dragons). I see a face on the full moon, on a store front and on a tree. I am comfortable thinking that I see amusement or befuddlement on the face of my son’s black lab when personification comes from my eyes and mind rather than hers.

I have many friends who work in politics and marketing. They are masters at creating illusions out of air. They can have me whistling their tune or fuming with resentment depending on how their message sits with my predisposition. Whether they are selling me a fabricated position masquerading as truth or convincing me that I need another ‘something’ in a different colour, their propaganda is spun from strands of sand. Each piece has a grain of substance but when they are combined, the only way that the deception holds is if we already share a common fiction. The sales pitch or the campaign spiel requires that I have already accepted some of the myth.

An email this morning was headlined ” Brian will save Alberta from the NDP ” You don’t need to understand the politics of the province or even who the players are to see that for the narrative to work, I need to believe that the province needs saving and that the NDP are a causal agent in the strife. ( I don’t accept either, but my opinion here isn’t important). The illusion; the tapestry being woven out of nothing has threads that only exist (like the white square) when we are attempting to make something out of nothing. If I am looking for a scapegoat and the messenger points me towards a mirage, it can become ‘real’. If I am addicted to buying the next icon, regardless of or because of its lack of utility, then the fantasy that I will be smarter, popular, or taller when I buy the iPhone 11 will stop being a hallucination and seem real as rain.

According to What is Psychology ” The illusion challenges the reductionist approach to vision as what we see in the image is not merely the sum of all its parts. We see something more. We actually perceive objects that are not really there. “Only by a holistic vision–seeing the four separate pies as parts of a single whole–do we perceive a square” (Simmons, 1996).”From Hamlet Act2, Scene 2, we see inside the mind of William Shakespeare when Hamlet’s conversation with Rosencrantz concludes with ” Why then ’tis none to you; for there is nothing either good or bad, but thinking makes it so. To me it is a prison.”The deception or illusion isn’t to be judged. The intent of the magician and the nature of the audience offers far more substance to the trick than any sleight or hand or word. Being aware of and discerning of the overwhelming array of stories, myths, narratives, fictions, deceptions, lies and fake stories is the best defence against hysteria, conformity, calamity, and regret. When you see the white square, ask yourself ” what kind of pie is being served?” That step might alone could prevent a long trip from the potion being proposed.

I believe that you are far more capable than you are given credit for.