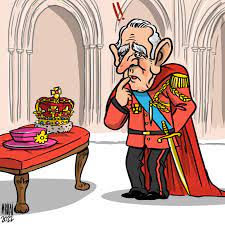 We considered leaving the Commonwealth in the 1970s, but refrained.

Yes, there was the value of the Privy Council as our final Court of Appeal.  Yes, there were some trade and travel benefits.  But many felt it would be a slap in the face of Queen Elizabeth.

We knew about her service during World War II as a mechanic; not sitting in an office, but driving trucks and fixing them.  We had the images of her dancing with Kwame Nkrumah.  And we knew she was anti-apartheid.

We had never liked Prince Charles.  The only time we began to like him was when he married Diana.  We liked her.

Then we learned of his adultery.  We learned how he had a relationship the ‘Rottweiler’, starting before the marriage to Diana, continuing through the marriage, and after.

We would never accept him as Head of the Commonwealth.