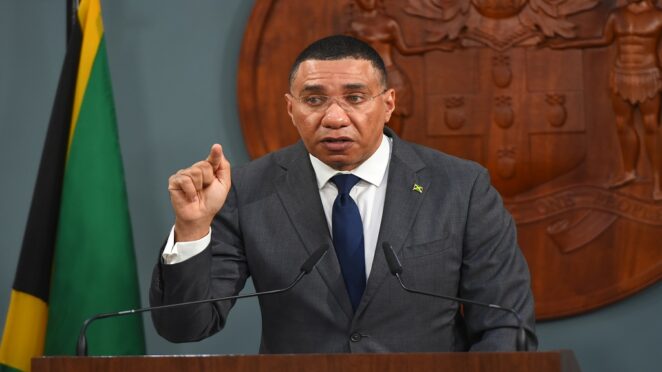 Andrew Holness became Prime Minister when his predecessor, Bruce Golding was forced to resign.  Holness was chosen because he gave out the vibe of a dumb puppy, harmless and decent.

Never before have so many wives and children of JLP Members of Parliament been shoved into positions they had no experience nor ability to manage.  Wives and children who couldn’t care less about the job or the people of Jamaica.  The point was pocket filling, for them, their families, outside lovers, and contributors.

The Jamaica Labour Party won the election.  Holness retained his innocent puppy presentation.   It fooled and continues to fool the public.   He seems oblivious and unconnected to the massive frauds that have occurred since his election in 2016 and reelection in 2020.

This is because he knows how to play innocent.

A simple example is The parish of Portland .  The same Roads are dug up time and again so as to pay constituents to vote for the Vaz dynasty.   The husband,  son of a previous M.P.  holds the seat forthe West, his wife, with absolutely no experience in government or interest, rules to the East.

It is the most undeveloped Parish,  an example of the kind of corruption which is now Jamaica’s Normal.

Celebrating 60 years of independence, never before has there been so many power blackouts, water lock offs, unrepaired roads, uncollected garbage in Jamaica’s history.

The reason is that money and resources are channeled into certain pockets. Contracts are granted depending on kick backs, and the use and abuse of public money standard.

For example,  the ridiculous campaign of Kamina Johnson Smith, daughter of previous M.P., Senator Anthony Johnson, for Commonwealth Secretary.  How many millions were spent on her losing campaign?  43 Million dollars.   It is said only a percentage was government money, but an investigation is going on.

Investigations into the corruption of Government agencies and officials is a pretense to buy time so the public forgets.  While  Andrew Holness stands there, looking so innocent.

Jamaica is the best example of a Kakistocrasy.