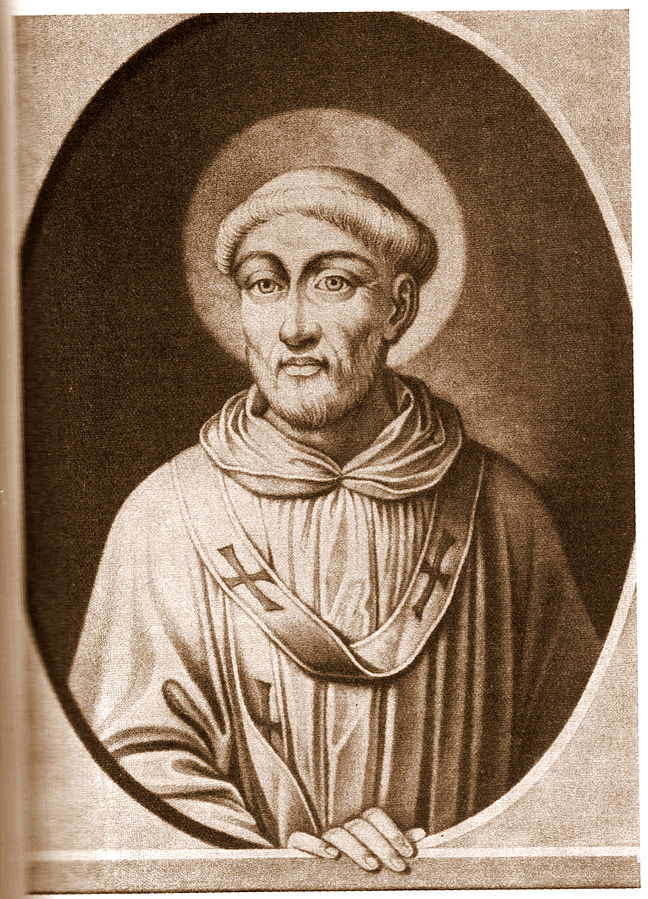 Depiction in Art: Shown with a dove by his side; or a tiara and a dove; or a sword or club; or kneeling at a block awaiting beheading. Sometimes shown with St Sebastian because he was martyred on his feast day or with a palm and cross. An image of Fabian is included in a painting attributed to Diamante (c. 1430-1498), which is in the Sistine Chapel.

The Liber Pontificalis tells us that Fabian was a Roman by birth; his father’s name was Fabius. Other than that, nothing is known of his early life.

According to Eusebius, Fabian was a layman, a farmer by trade, who came to visit Rome on the death of Pope Anterus. It was decided to make him the pope when, during the papal election, a dove flew through an open window and landed on his head. Those who saw it were reminded of the descent of the Holy Spirit on Jesus at His baptism and took it to be God making His choice known.

Although he reigned for fourteen years, little is known of his papacy. According to Cyprian [Letter 59], Fabian condemned Bishop Privatus of Lambaesa (Africa)  as a heretic although the details of his false teaching are, apparently, lost to history. Origen defended his orthodoxy before Fabian.

He brought the body of St Pontian, pope and martyr, from Sardinia and had the relics of Sts Pontian and Hippolytus, who had died in exile, brought back to Rome for proper burial.

Under Fabian’s rule, significant restoration work was done on the catacombs.

According to the Liber Pontificalis, Fabian divided Rome into seven deaconries giving the Church of Rome a close-knit structure. He also sent St Dionysius (Denis) and other preachers into Gaul. One legend relates that he baptized Emperor Philip the Arab and his son but this is unlikely.

Although Fabian had a good relationship with the imperial government, he was martyred under Emperor Decius, the first of his victims. The stone that covered Fabian’s grave is still located in the catacombs of St Callistus in Rome where he was buried. It bears the inscription “Fabian, bishop, martyr.” His body was rediscovered in 1915.

St Cyprian described Fabian as “an incomparable man, the glory of whose death corresponded with the holiness of his life.”

Pseudo-Isadore attributes decretals to Fabian but they are apocryphal.