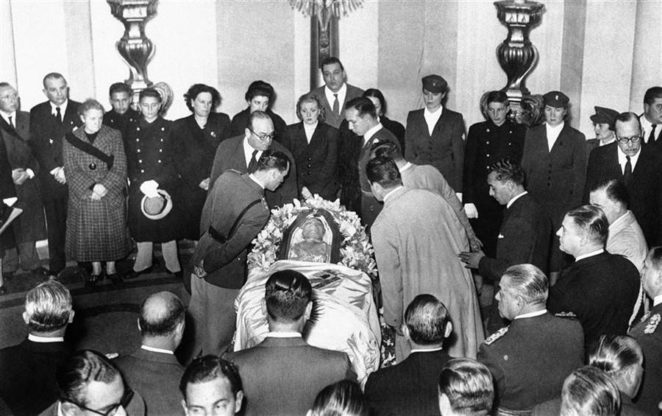 Even in death, Juan Peron Eva did not give peace. While he was on his deathbed, Juan is uortačio with certain pathologist Dr. Pedro Arom Skov and together they plan the embalming tela.Ara with his secret recipe embalming readily welcomed the news of Eve’s death, and treatment is not started an hour after the last beats of her heart . Ara’s Eve organs preserved. He made only two small incisions all over the body – one on the neck and the other on foot. Fluid from the body was replaced by his secret recipe based on alcohol and glycerin. The body is also injected and wax, and then wrapped in a thin layer of plastic film. All in all, the whole process took a year and cost $ 100,000. The result was a body that looked more like a wax doll; a visitor who had once touched, said that “sounded hollow, like dolls in shop windows. ” Another thing that visitors notice is that dr. Ara always there, next to her body and was always gentle watch. After the funerals, Evita’s body was kept in the building of the Argentine General Confederation of Labor until a suitable monument in her honor does not build. By this we mean the grandiose mausoleum with a statue larger and grander than the Statue of Liberty in New York. In 1955 he was ousted from power during the Liberation Revolution, followed by rapid collision escaped from Argentina to Spain. Evita’s body was left behind – only with a doctor Arom.