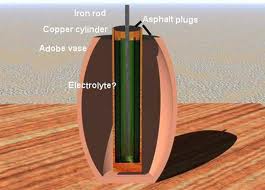 A number of years ago archaeologists in Iraq found what appears to be an ancient electric battery. The object, dating from roughly 230 BC, was found in an excavation of a Parthian village in 1936, and is known as the Baghdad Battery. It consists of a small vase containing a copper cylinder surrounding an iron rod. If it is a battery, it would pre-date all modern ones by around 2000 years. Skeptics insist that it is just a scroll case. After all, what use could the people of the time have had for electricity?

However it cannot be disputed that if an acid such as lemon juice is poured into such a vase, an electric current is created! In fact the current is sufficient to be used to electroplate metal objects suspended in the correct metal solution. Additionally a weal electric current can be used to move certain objects, so possibly it had that function.

If the “battery” was indeed used for the electroplating purpose it may mean that much of what modern museums classify as ancient gold may be only plate….So maybe some of their artifacts aren’t as priceless as they think!