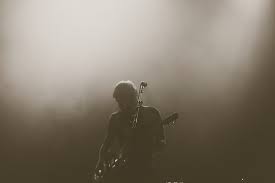 Bob had eaten a late dinner, and was relaxing on the veranda, hearing third rate musicians.

It was nearly ten, he thought to find his room, when he heard a guitar.

To describe the music that was pouring from the strings he would have to say it was talking.

There was no singing, just the music, and it was magnificent.

He turned to see a single blue light in a corner, and a man partially hidden by shadows, playing.  The man was intense on what he was doing.

When the guitarist finished that song, people began applauding.   The guitarist  paused about fifteen seconds, before beginning another tune.