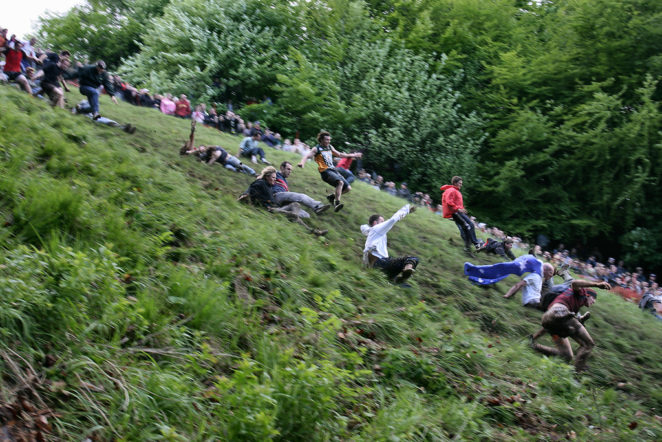 There is something about the human spirit, or at least the young male human spirit, that delights in bravado and risking one’s life for the sheer hell of it. In Spain it is traditional for hundreds of young men (and even a few women) to run through the streets of Pamplona chased by a herd of bulls. In England, things are done a bit differently. Here they fall down a hill while chasing a cheese! 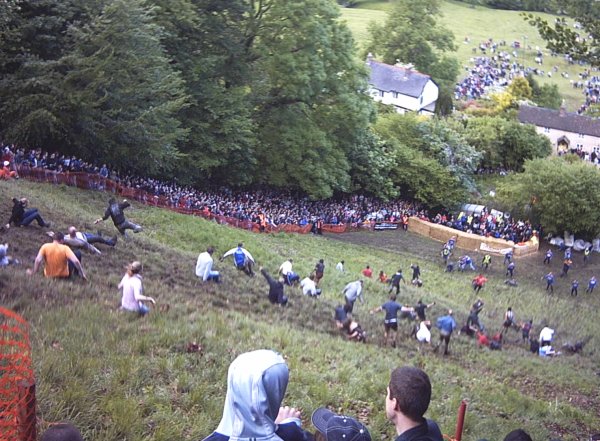 The village of Brockworth is in Gloucestershire, where the Cotswold Hills meet the plain of the River Severn. Cooper’s Hill is a particularly steep slope on the edge of the village and it has been the site of the annual cheese rolling event for hundreds of years. It has been recorded as taking place since the early 19th century, but its origins may be even older than that. The traditional date was Whit Monday, but in recent years it has taken place on Spring Bank Holiday which is the last Monday in May.

The idea is that a round Double Gloucester cheese is rolled down the hill and the first person to run after it and catch it wins it as their prize. The only problem is that the hill is extremely steep (almost vertical in places) and the chance of actually running down it, let alone keeping up with the cheese, is virtually nil. Before long gravity takes over and the runners turn into fallers, tumblers, rollers and, if they are really unlucky, candidates for a ride to the nearest hospital in the back of an ambulance!

Although the event was of purely local interest for most of its existence, in recent years it has attracted worldwide attention and people travel from all over to take part or merely spectate. It is now common for four races to take place, each of about twenty competitors. Should all the ambulances be occupied after the first or second race, there is sometimes a delay before the next one can start.

The racers stand at the top of the hill and wait for the traditional call from the master of ceremonies of: “One to be ready. Two to be steady. Three to prepare. Four to be off!” The cheese has a one second start, but it is in little danger of being caught before the end of the 230-metre course as it can reach a speed of 70 miles an hour before it thuds into the straw bales at the foot of the hill. In the photo above you can just see the cheese on the edge of the shadowed area.

Cuts and bruises are to be expected, and dislocations and broken limbs are not unknown. Needless to say, the event has been threatened by health and safety considerations, and the owners of the cheeses have been warned that they might be held legally responsible for any injury claims that are forthcoming. However, the force of tradition has always won through and no doubt eighty more idiots will hurl themselves off the Cotswolds this year, and the year after that, and …