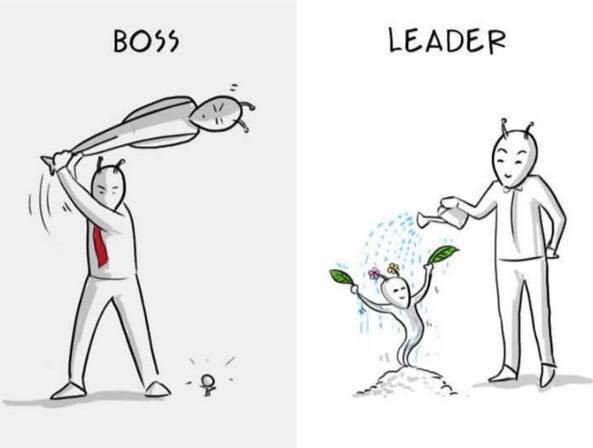 In the business world we have a boss and a leader. And a clear distinction can be made between these two. As we know, the boss is known for being “bossy”. And leader are known for being involved in the process. He is not commanding, but rather participating and helping the other. The leader is a person that gives encouragement, motivation, offers help and he is seen as friend. Team members will gladly follow a leader. The fact that the leader does not give orders is highly motivating.

A boss’s goal is to get things done. The leader’s goal- to empower and motivate the whole team. The leader will constantly give support and provide growth. He believes that the best results are given when people can develop as persons, and he will do the best to motivate them.

The boss does not want any mistakes, and he will give punishment if you make any. He only wants the best results. While the leader will help you when in trouble. He will understand and support you. A leader will always give a helping hand when you are in need.

The boss knows how it’s done. And he wants you to do the same. While, the leader will gladly show you how a certain task can be done. The leader is involved in the process.And he certainly is a good example. This way, he will provide motivation and encouragement for the team.

The boss will give orders to people. The leader will go first and make you follow him. That way he will encourage his team to do the task. He brings out the best in the team. The team would rather follow a leader, than follow an order.

The boss will keep the credit for himself. He will leave out his team and bring out himself. The leader will make himself a part of the team. He is not the main one. Rather he will show respect for the rest of the team and let them know that they are important.

The boss hates when things don’t happen as planned. He will rather accuse you for fails. A true leader will not waste the time in accusing the other. He will start implementing plan B. The leader is someone that can handle a situation and provide a solution.