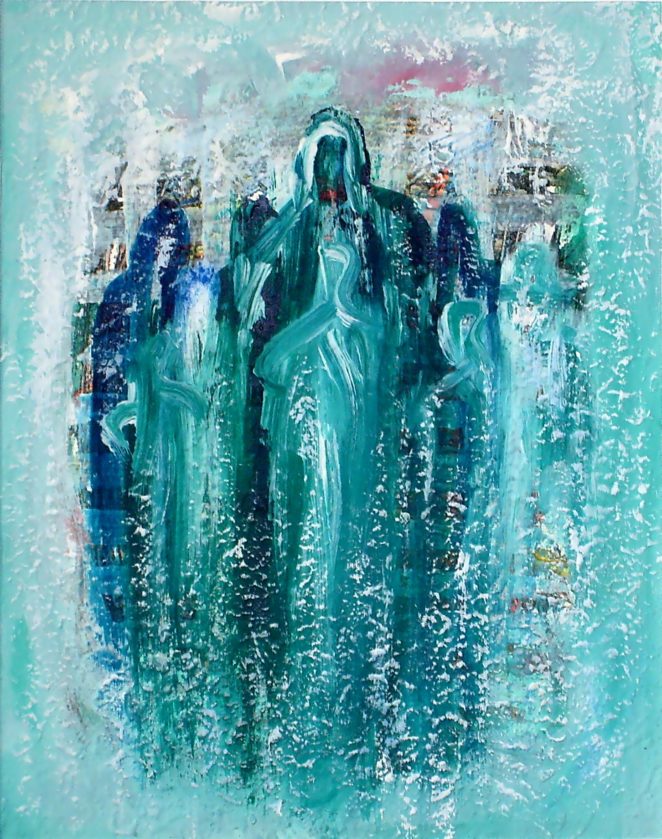 Already Plato spoke of the special relationship between sight and hearing. This relationship is described as synaesthesia, the ability to perceive different sensations through different senses or rather the sensation that we perceive one sense, creating the perception of another sense. This is crucial in painting, as well as the music became a time and a rhythm likewise, which was also the common thread that music and painting moves to harmonize. The beginning of the twentieth century is associated with experimentation with color and rhythm. The connection of music and painting was attempted by Frantisek Kupka or M.Ciurlionis. Synesthesia is a special kind of perception, when the sensory input (mostly audio) leads to automatic, will uncontrolled experiencing different sensory perception (most often visual).

This attempt to combine our artworks we decided to do with Jan Vozáry. We prepare CD cover and booklet for the music group: Poets of the silence  (Básníci ticha) , in which plays as a drummer.  Here is the first song from the upcoming album.

Who is Jan Vozáry? He is a Czech musician. Between 1985 and 1993 he played the drums in the group Ocean (Oceán) Great success of Oceán 1989 December 90 January 28 gigs as the support band for the famous  ERASURE . In 2011, the group resumed its activities. More about his work and our cooperation on CD cover &  booklet  in the forthcoming interview.

Here some of his work remixing Haifa: