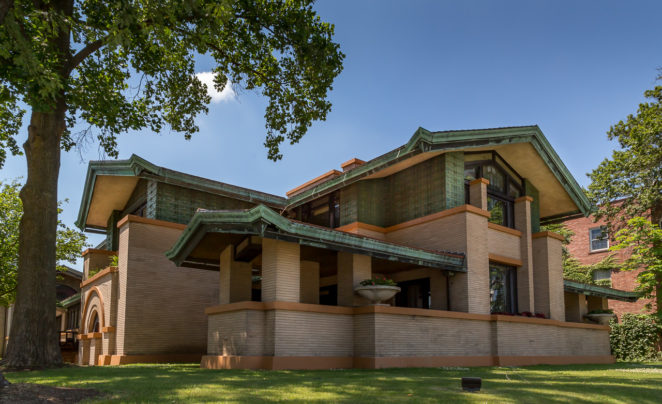 While in Springfield, Illinois we had to visit the Frank Lloyd Wright Dana Thomas House.  This house was built for Susie Dana in 1902 which means it predates the Darwin Martin house in Buffalo by 5 years.  This house is situated right downtown Springfield two blocks from the governor’s mansion and right up against the railroad tracks. Susie Dana commissioned and had the house built by the new and upcoming architect Frank Lloyd Wright using her fathers vast fortune after he died. He made much of his money on railroad ventures so they were not against building near this active track.

The house occupied several blocks of land and totaled 10,900 square feet, huge even by today’s standards. It wrapped around and kept partially intact part of her father’s old Victorian house on the site but most of it was demolished.  Another house/cottage on site was moved intact across the tracks which we will see later.

This house incorporates many of the new elements of Wright’s style including horizontal lines, a base in light horizontal bricks, lots of Art Glass windows and copper gutters and copper fascias and frieze boards. Also present were the huge decorative stone or cement urns that would reappear in a different shape at the Darwin Martin house later.

This house had the most FLW Art Glass windows of any Frank Lloyd Wright house in the world and has most of its original FLW designed lighting fixtures and furniture.