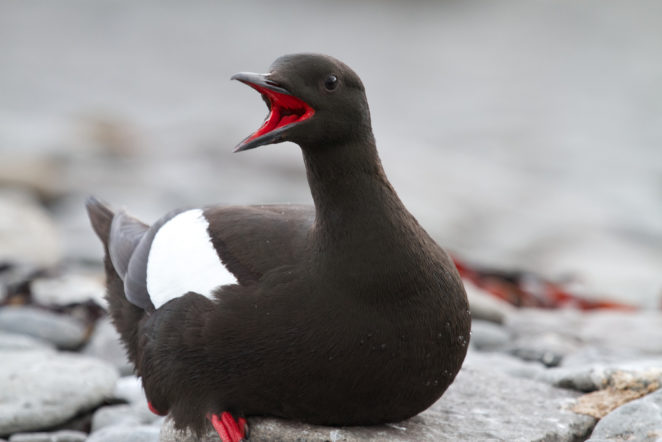 The black guillemot (Cepphus grylle) is widely distributed in North America, northern Europe and Asia. It is much less common in the British Isles than its “non-black” guillemot cousin, the highest numbers being seen in the northern isles and down the west coast of Scotland. It is also seen on Irish coasts and the Isle of Man.

The black guillemot’s winter plumage is very different from that seen in the summer. Much of the black is lost, leaving white with black mottling.

The call of the black guillemot is a high-pitched whistle or whining sound.

Other differences between the black guillemot and the guillemot include the size. The black guillemot is noticeably smaller at around 33-35 centimetres in length (13 to 14 inches). It also has a smaller bill, and it walks more easily, with the feet not set so far back. It is also far less gregarious, often being seen alone, in pairs or in small groups.

Black guillemots stay at sea outside the breeding season, but not far from land. When the snow and ice have melted, which can be well into April in some parts of their range, they come ashore to seek nesting sites, in rocky crevices, on ledges or even in burrows left by puffins. They do not form huge breeding colonies, but up to a hundred pairs may be found in fairly close proximity.

The clutch is usually of two eggs laid on the bare rock, sometimes wedged with small stones to prevent them rolling away. Both partners incubate the eggs, which take up to 30 days to hatch. The young birds take food from their parents three to five times a day, for around 35 days. Typically, they leave the nest at night and make straight for the sea. Only one brood is raised per season.

The diet of the black guillemot is mainly fish, with molluscs and crustaceans also being eaten.

The black guillemot has “amber status” in terms of its vulnerability as a species, although the number of breeding pairs in the areas mentioned above is in the tens of thousands. The threat is largely due to the severe effect that oil spills can have on seabird populations. In the past, ships cleaning their oil tanks at sea have caused serious problems.

(The photo has been taken from a copyright-free source)