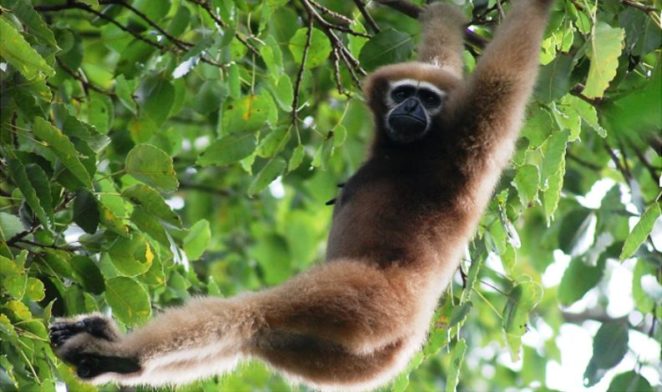 The Hollongapar Gibbon Wildlife Sanctuary was formerly known as Gibbon Wildlife Sanctuary. The name was changed in May, 2004 due to the importance of another tree species growing within the region. It got its name from the two living organisms which dominate the Sanctuary’s ecosystem. First is the Hollong, a dominant tree species in the region of Jorhat. Second is the Hoolock Gibbon, the only ape species found in India. Apart from conserving these two species, the Sanctuary also houses many rare and endangered species of the world. Initially it was established as a Forest Reserve with an isolated area for the protection of the Evergreen Forests. With time the significance of the sanctuary grew and now holds great importance to the ecosystem within the Sanctuary. This conservation site only got the title of a Sanctuary in 1997 by the Assamese Government. Comparatively, it covers a very small area and houses 7 out of 9 non-human primates within the Sanctuary. This has lead to a considerable decrease in the number of bird species over the years. In this chapter, we will learn how to get about and what to expect at Hollongapar Gibbon Wildlife Sanctuary.

The Hollongapar Gibbon Wildlife Sanctuary is spread over an area of 21 sq.km in the Jorhat District of Assam. It lies 22 km from the town of Jorhat. The highway is well connected with all the major cities in Assam making it easily accessible. The landscapes within are covered by Semi-Evergreen forests and Evergreen patches and surrounded by tea-gardens and small villages. The latter was a direct result of the intention to extend the forest to the foothills of Patkai Mountain Range. Consequently, the Sanctuary fell victim to illegal logging, the encroachment of human settlements and habitat fragmentation. Humans began finding fodder for the cattle from the forest area which brought frequent interferences. Elephants started using the tea gardens as a pathway towards Nagaland, which leads to further poaching of these magnificent creatures. The Rail line which runs across a part of the Sanctuary also alienated a group of Gibbons.

This leads the Gibbons to be stranded only within a small area. The encroachment by the tea gardeners has degraded the quality of the Sanctuary substantially. Still, the Sanctuary stands as a beautiful example of human interference and nature’s solution for the same. The Sanctuary has been divided into 3 parts. The upper layer of the Sanctuary is dominated by Hoolong Trees covering a vast area. The middle layer is dominated by Nahar trees while the lower levels include evergreen shrubs and herbs. The topography of the Sanctuary gently slopes as we move from the southeast to the northwest region within. Along the border flows the Bhogdoi River which creates a waterlogged region filled with semi-hydrophytic plants.

Reaching Hollongapar Gibbon Wildlife Sanctuary is not difficult or confusing as there are multiple options. Let’s see what they are.

The nearest Airport to Hollongapar Gibbon Wildlife Sanctuary is Jorhat Airport at Jorhat. It lies 22km from Jorhat Town and you can get cab/taxi facilities and buses going towards the Sanctuary daily. The Jorhat Airport is connected with all the major cities of India. The nearest International Airport to Jorhat town is at Guwahati and Imphal.

The Sanctuary is well connected by roads to the major cities in Assam as well. The Mariani Bus Stop at Jorhat Town lies just 5km from the Sanctuary. You can also take a cab or a bus from Jorhat town or from Guwahati to the Wildlife Sanctuary.

The weather surrounding Hollongapar Gibbon Wildlife Sanctuary is usually pleasant with a temperature rising up to 28 degrees Celsius during Summers. But traveling in the sun during summers can get really unpleasant, especially around noon. The region also experiences heavy rainfall during Monsoons which makes the Sanctuary inaccessible. The winters are cool with the temperature ranging between 15-18 degrees Celsius.

Therefore the ideal time to plan a trip to this Sanctuary is during winters, from October till March. The weather is comparatively pleasant and the greenery of the surroundings become more profound during this time of the year. The possibility of coming across animals within the park is more during this time of the year. It is advisable to carry warm clothes during winter, as the temperature can drop drastically without any warnings.

Though the Hollongapar Gibbon Wildlife Sanctuary is spread across a small distance, it is rich in biodiversity. It houses 7 of the 9 species of primates within the boundary of the Sanctuary, along with other birds and animals. The Sanctuary is also dominated by the population of Hoolock Gibbons, India’s only nocturnal primate belonging to the ape family. These animals can be seen throughout the Sanctuary in different groups. Some of the other primates found here are- stump-tailed Macaque, Pig-tailed Macaque, Capped Langur, Rhesus Macaques, and Slow Loris. Other mammals seen here are Leopards, Tigers, Asian Elephants, Jungle Cats, Chinese Pangolin, Jackal, Indian Fox and many more.

Reptiles can also be found around the Sanctuary, and they normally remain anonymous to the surroundings. Some of them are- Rock Python, Cobra, King Cobra, and Common Rat Snake. Some species of Turtles also constitute a part of the ecosystem surrounding the Sanctuary.

Hollongapar Gibbon Wildlife Sanctuary is an abode for hundreds of species of plants, herbs, shrubs, and trees covering the area. These forest areas are dominated by the plant species known as Hoolong trees. Scattered across the region are different species of bamboo, canes, orchids, and ferns. Trees like Hoolong, Sam, Holokh, JackFruit, Ajar, Sashi, Titachopa, Seleng, Amari, Dewa Sam, Himoli, etc. are also found here. The top layer normally consists of Sopas, Bhelu, Hingori, Amari, etc. While the lower layer includes a variety of evergreen shrubs, herbs, and semi-hydrophytic plants. The landscapes and the greenery around makes a trip to this Sanctuary a worthwhile experience.