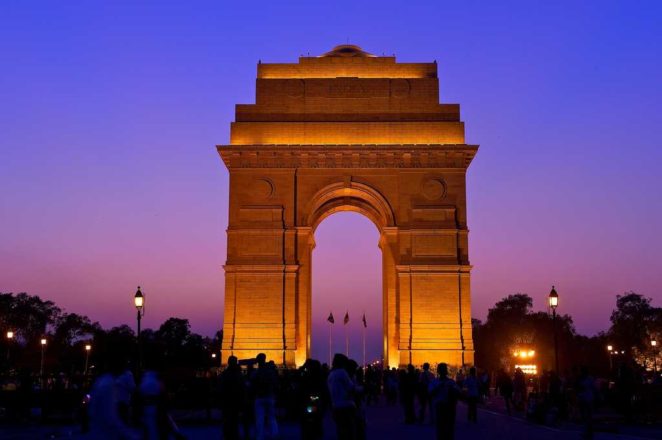 India Gate is the first 42-meter high gate situated in the center of Delhi which is an imitation of ‘Arc de Triomphe’ built by the designed by a prominent war memorial architect Edwin Lutyens. It is a magnificent stone archway which is situated in the heart of Delhi. The construction of India Gate was started on February 10, 1921, but was disclosed to the citizens after ten years on February 12, 1931. This war memorial was built in the memory of the 70,000 soldiers who lost their lives during World War I and Anglo-Afghan war. The soldiers were fighting for the British army and they lost their lives for them.

Later, another memorial was added to this war memorial and it named as “Amar Jawan Jyoti”. This structure was constructed under the arch which was dedicated to the soldiers who lost their lives in the Indo-Pakistan War of December 1971. The construction of the Amar Jawan Jyoti is very unique and just a view of the same gives a patriotic feeling. The Amar Jawan Jyoti is a black shrine has which has an eternal flame burning day and night along with a rifle with the helmet on the top. Every day there are thousands of people who visit India Gate and pay tribute to the soldiers but the 26th of January is the day when the crowd is the most. On this day the Prime Minister and President along with other guest come to Amar Jawan Jyoti to pay the tribute to the soldiers. It a custom which is followed since ages.

The India Gate is surrounded by lush green lawns and it is also a famous picnic spot. The other things that make India gate interesting are the fountain and the boating which goes on continuously. India gate is beautiful but the beauty of the monument increases in the evening after the illumination of the lights. There are many other places nearby India Gate for the visitors and the nearest metro station to any location is the Central Secretariat. A person can enjoy the visit to India Gate at any time of the year and it is free of cost.