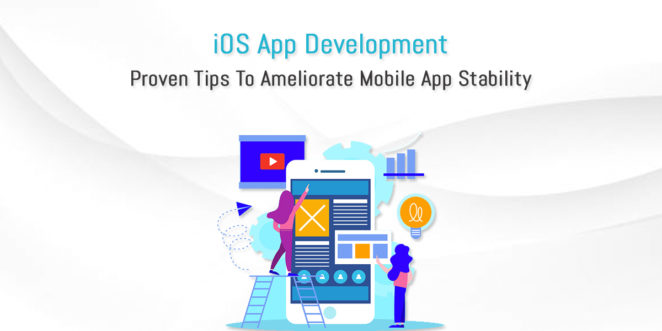 With millions of new apps being launched on App Store, one of the biggest factors of your mobile app is its stability. Whereas it is becoming tough for us to focus on developing clutter-free and stable mobile apps with ever-evolving technologies like iOS. Only a performant and stable app can elevate the user’s perception in regards to your brand along with offering a great UX.

Failing to provide stability is one of the biggest reason why users uninstall mobile apps. Stability falls under the UX umbrella where you provide the end-users with an application that is easy to use and doesn’t crash while using. Although an unstable iOS app doesn’t indicate a complete failure, it may irritate users somehow.

Whenever you opt for iPhone mobile app development, you have to work hard for every single customer of your app. You can not simply create one shop for all. One serious concern of App stability that you face even before exposing to customer is App store launch. If you haven’t checked your iOS app thoroughly for its stability, it may get spurned at App store level itself.

So, you need to be attentive about the factors that may contribute to the instability of your mobile application. To name a few, below is a list of some crucial factors for your reference.

Whenever you choose to build an iOS app, it shouldn’t overtly depend on a certain iOS version. This is because operating systems goon upgrading from time to time. Sometimes it happens more frequently.So, it is recommended for you to develop a mobile app that is not bound to crash while opened on another version of OS, instead of the default one that you consider while development.

Yes, there are sometimes when your app can become unstable due to sloppy coding. Even if no syntactical error is visible, there is a fair chance to encounter bad programming.

Many times programmers prefer big chunks of code from freely available online coding websites. It can easily make a 100 line code to 300 lines. Consequently, it can make your app unstable. Thus, your iOS app development team needs to avoid these practices and, a custom approach should be dedicated to the development process.

Ignoring memory management is one of the common reasons for app crashes. Not all app users possess higher specs. Moreover, there a reseveral pre-loaded apps in the devices by mobile phone companies,leaving little space in the memory for your app.

So, first, you need to consider memory constraints and check with the functions that can be performed without using the device memory.Sometimes, if you didn’t optimize code, it can hog memory needlessly. Practice error handling routines when there is less memory available for your app. Be ready with an exit strategy so that your app doesn’t crash, instead notify the user about memory issue.

No matter how many cutting-edge features you would want to include in your iOS app. For instance, the 3D touch functions in latest iPhone series is a tempting one for all developers. However, you should not isolate the users who are still using old iPhones.

Keep provisions for users who haven’t yet upgraded to the latest iPhone models or don’t have such advanced features. You need to remember that any advanced or latest feature should be included in the app when it adds some real value to users. Avoid including latest features just to show off your business status.

Last but not least, you need to test your app from compatibility aspect with other apps while interacting to serve a purpose. For instance, your iOS app may be asked to access any social media API.Make sure that you have designed and developed your app with such APIs & data formats being used by internet services or by other apps.

iOS app stability is crucial. Try to focus on quality rather than quantity. That means it is not important to add multiple features in your app as long as you are offering solid performance with limited features.

Always check and test your app at every stage for stability. All areas mentioned in this article are helpful to keep a note of stability consistency of your iPhone app. At last, it is up to you only what kind of app you want to develop and what kind of expectations you do have from it. In case you have any ideas or thoughts related to this topic, you can share them with me.