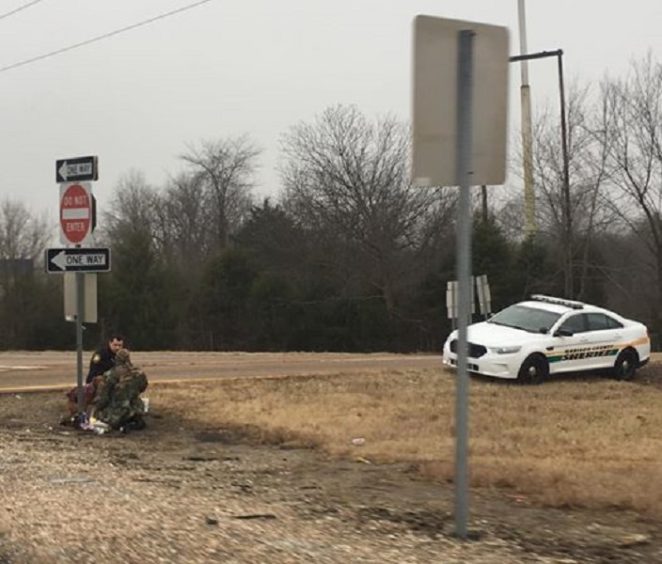 Madison County Deputy William Haley who does his best to protect and serve the people in his community without any expectation of any reward from the people that he assists on his day to day work in Mississippi, was photographed by Elizabeth McClain who happened to be in the area when she witnessed Officer Haley sharing a hamburger and a soft drink who is a homeless man.

Officer Haley saw a homeless man on the side of a highway near Jackson Mississippi when he decided to share a meal and have a chat with the homeless man as a way to assist someone who needed his help to find his way back into society as a person who can assist others in need.

Officer Haley admits that before he joined the Madison County Sheriff’s Office, he did serve in the United States Marines Corps to treat people the way he would like to be treated which is by setting an example for others to lend a conversation with people so both the officer and the person who has a friendly chat with him can have a better self esteem after their quick meeting.

The story of the officer’s kind act appeared on Facebook which received a lot of positive replies from the social media site which not only gave the Madison County Sheriff’s Office a boost in morale. It will inspire other people to learn how to make the lives of people around the world feel better after a quick boost of morale from an authority figure.