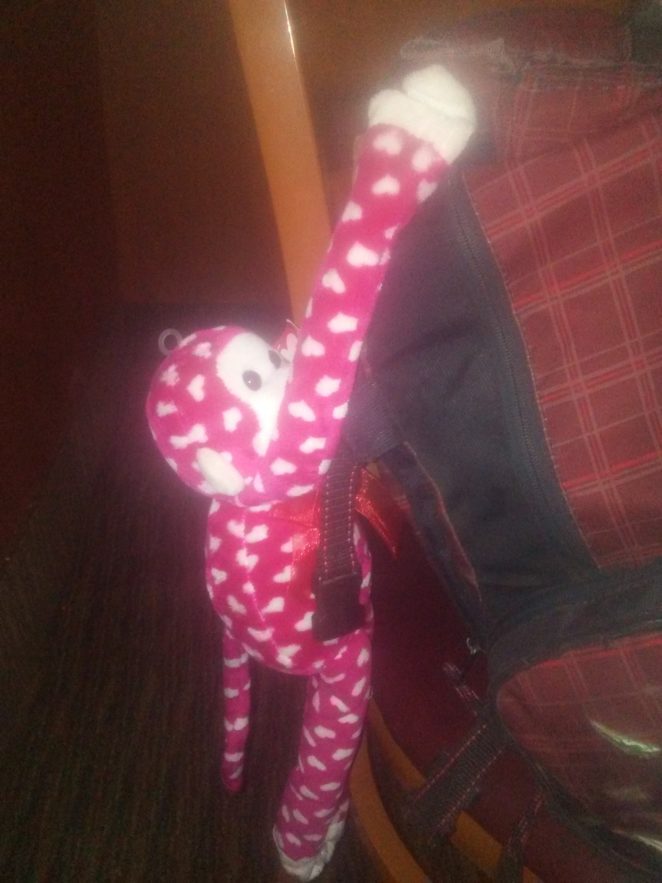 See this monkey? I carried this thing around for quite some time on my backpack.

It served to remind me to not die stoned on drugs.

I was given this as a gift from a lady-friend. Since I was fighting off a years-long drug addiction, I chose to name it after a beautiful woman I once knew named Delaney, who had recently died from a drug overdose.

Hearing of her loss was one of the few times I have just given in to the tears. It was also one of the things which pushed me to making the effort to clean up.

It finally got through to me that the entire purpose of the drug trade is enslavement of powerful, beautiful, Human souls.

It’s not about “getting high” or “feeling good” or anything beyond enslavement – both financial and spiritual.

So, I named the monkey after my beautiful friend Delaney, so her memory would ride me to sobriety.

I never got to tell her goodbye and she died alone and this was all I could think of to honor her memory.

Eventually, I became string enough to let Delaney go. I gave the monkey to a young girl at a bus stop, who was having a bad day, giving her a smile.

I know that’s what Delaney would have done.

She is gone. I accept that, now. And, those who lied to her about drugs, enslaved and exploited her, will pay for their actions, before I die.