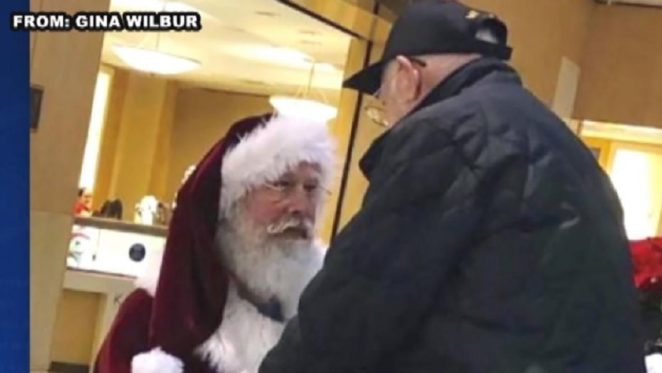 I am amazed how the few remaining veterans who served in World War II who are still alive are receiving the respect that they deserve for being part of our military for fought for our freedoms in what is being called “The Greatest Generation.” This story comes from Concord Mall in Wilmington Delaware where a shopper name Gina Wilbur took a picture of Bob Smiley (who is the foreground) shaking the hand of Santa Claus who was very respectful to Bob by taking a knee as he thanked one of the last remaining World War II veterans.

Bob Smiley who is 93 years of age told Santa Claus that his service during World War II was a “duty” for himself and everyone who joined the U S military to battle against the Axis Powers.

Bob is very thankful that anyone who thanks him for serving our nation with a firm handshake appreciates what he and other young men who served in World War II and beyond.