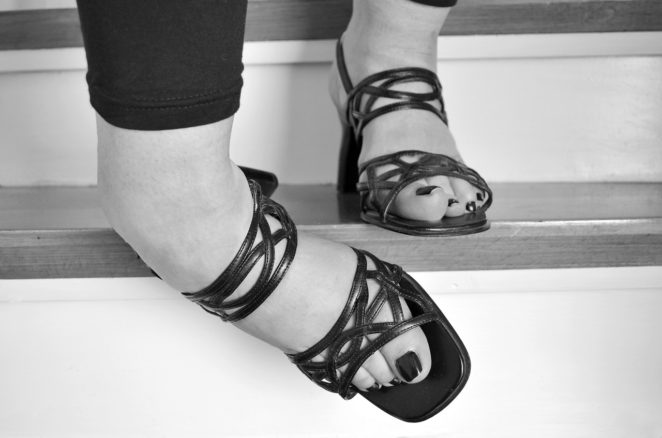 although I had several other errands to fit into the day.

All went well on the inbound journey – apart from the taxi choosing the underpass heading to Marylebone but then the choices are difficult with so many roads now No Entry.

All went well and when I finished I walked up to Oxford Street to John Lewis to look for a dress for my granddaughter. I found the dress and also bought my Christmas Cards – very early but saves the crowds.

Whilst in the store I went to look at the shoes. I have always worn heels but since I had a bad break in my leg some years ago I have to opt for the kitten heels. I found a pair of black kitten heel sling backs so decided to buy them whilst they were available.

After this I took a taxi back to the station and boarded the train. As I was carrying several bags momentarily I put them on the table – only to realize that I had placed the shoes on the table; I am superstitious and placing new shoes (unworn) on a table is one of the ‘unlucky’ superstitions. I told myself not to worry about this – it was probably ridiculous!

I opened my handbag to discover my phone charger was missing. I realized that I had obviously left it in the salon. I called my hairdresser; he found the charger and assured me he would post it to me.

The journey went smoothly and I reached the house. The dog was quite settled; I sorted out my shopping, prepared a snack and played with the dog whilst watching some television.

Later I started to prepare for bed. The dog went into the kitchen and I closed the gate and returned to the sitting room to turn off the television. There is a step down into the room and as I stepped the sole of my mule caught on the carpet, my foot came out of the mule and I lost my footing and hit the floor with my forehead. It is a wooden floor but fortunately I landed with my head on the rug. It was extremely painful but I was concerned if I had done any real damage.

After a short interval I pulled myself up onto the sofa. I phoned my son and told him what I had done. He questioned me forensically, and decided that I needed a cold compress on the forehead but probably was not concussed. He stayed on the phone for some thirty minutes and then decided I was probably safe to walk upstairs. The cold compress had helped the swelling but it was obvious there was some grazing. I felt a bit shaky. It took a while to get to sleep and the forehead was very painful when I awoke during the night.

However, the following morning I applied some antiseptic cream to grazed area which helped.

My son thought I may have a black eye by next day and I was pleased to find that did not happen. However, I now see that there is pale but multi-coloured bruising appearing not only on the forehead but down the side of the nose.

The only consolation is that – it could have been worse!