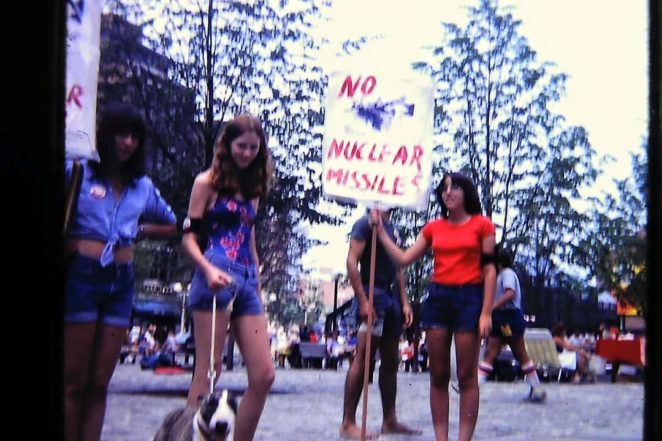 August 6-9, 1977      A few weeks after my arrest at the Seabrook nuclear power plant construction site I learned of a new action that would be taking place in Boston. The recently formed mobilization for Survival had brought together peace, environmental, and human right s activists with a bold 4 point agenda:

I was impressed with the cogent analysis of this group that saw the links between commercial nuclear energy & atomic weapons and sought to basically fulfill the biblical imperative to beat swords into plowshares. I joined in July 1977 and received word that a 72 hour vigil for peace and nuclear disarment would commence on August 6, 1977, the 32nd anniversary of the first atomic bomb being dropped on Hiroshima and would conclude on August 9, 1977, marking the 32nd anniversary of the  2nd atomic bombing at Nagasaki. My mom asked me if I thought I could stay awake for 72 hours. I said, “I’ll drink a lot of coffee!”  I attended the vigil , which was held in front of historic Fanueil Hall, a meeting place of early American Independence activists. It seemed fitting. at the conclusion of our vigil we marched from Boston to Cambridge to rally outside Draper Laboratories, an M.I.T. facility that was involved in nuclear weapons research. We held a spirited rally and reached a lot of people, getting the Boston chapter of Mobilization For Survival of to a great start.