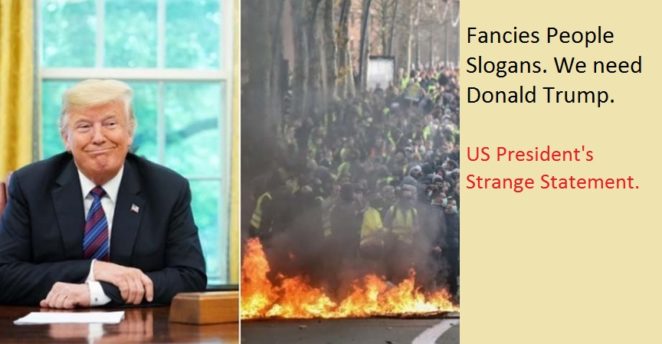 Washington: US President Donald Trump said that protesters in France are “We need Trump”  in the ongoing protests on oil prices in France. Francis people  do not agree on the announcement of Prime Minister Edwards for the suspension of oil price for 90 days.

The series of violent protests continues, more than a thousand people were wounded in recent clashes between police and protesters, Police arrested more than 1700 protesters, and protester are demanding the resignation of President Emanuel.

The Paris Agreement isn’t working out so well for Paris. Protests and riots all over France. People do not want to pay large sums of money, much to third world countries (that are questionably run), in order to maybe protect the environment. Chanting “We Want Trump!” Love France.

America is booming, Europe is burning

“We want Trump” being chanted through the streets of Paris

Trump and his supporters, this misunderstanding, was due to re-viral the video of a gathering gathered to welcome at the arrival of US president in London. In this video, a person is wearing a trump mask, welcome the Trump in London.

English patriots sing "We want Trump" as man in Donald mask dances at #FreeTommyRobinson Rally #MAGA God bless @realDonaldTrump tens of thousands will be there to welcome you to London pic.twitter.com/3GhksPDXJo