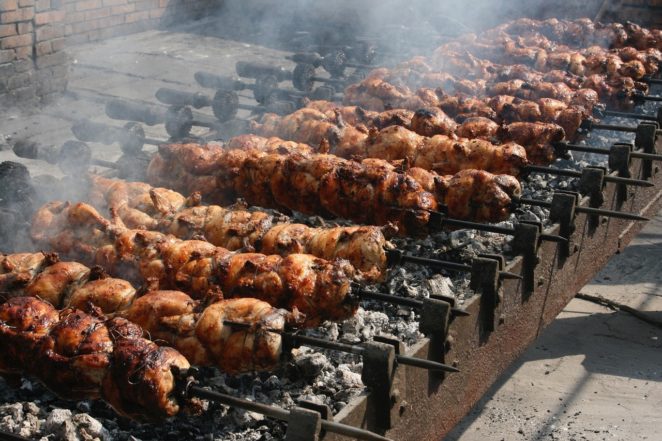 Most popular grills dish around the world is kabab. The word kabab is derived from an Arabic word ‘Cabob’ which means to burn or char, if you grow in North India then you familiar to kababs. World famous kabab is tunday/ galouti kabab which is originated in Lucknow. Kababs is Mughlai or nawabi dish. Mutton minces balance with Grounded species and cooks over charcoal. The most well known Awadhi cuisine is mutton kabab, which now become a popular street food of India. Some food writers believe that kababs actually originated in Turkey/ Middle East when soldiers grilled chunks of raw meat on swords in the battlefield. You can also add flavor with kebab seasoning.

Seekh Kabab: One of the most popular and delicious kababs. Seekh kabab made from mutton mince blend with spices and then grilled on skewers over charcoal. This is typically long and cylindrical shape. This is bit spicy and serves with mint-green coriander chutney along with sliced onions. This sometimes eats with rumali roti. This is very soft and has balance Indian species.

Galouti Kabab: Galouti kabab is originated in Lucknow. This is Awadhi cuisine dish and this is the nawabi dish which generally eaten in breakfast with ulte tawa ka parantha (which is a specialty of Lucknow). Galouti kabab has history, royal cooks to invent a kabab that would be so soft that it could be eaten with bare gums (because old nawab love to eat kabab but he has weak teeth so orders his cooker to make kabab which is a softy and don’t need to chew).

Shami Kabab: Shami Kabab (or Shaami Kabab) is a popular dish of Awadhi cuisine. Shami kababs were invented by a highly skilled royal cook for a toothless Nawab of Lucknow. This kabab is pre-cooked, mutton mince and chana daal cooked with hot spices. Cooked meat is then roughly ground (do not make a paste) and then shaped into round patties and is shallow fried. It serves with green chutney dip and is very popular in Ramzan (Muslim’s month of fasting).

Kakori Kabab: Kakori kabab name after the city which is in Lucknow (Uttar Pradesh). These are very soft and melt in the mouth as soon you put in your mouth, you don’t need to chew them. it traditional made from lamb mince, but know days is made from mutton mince. Mutton minces mix with species and onion, raw papaya (which help to softy the kababs). Then cook on skewers over the charcoal grill.