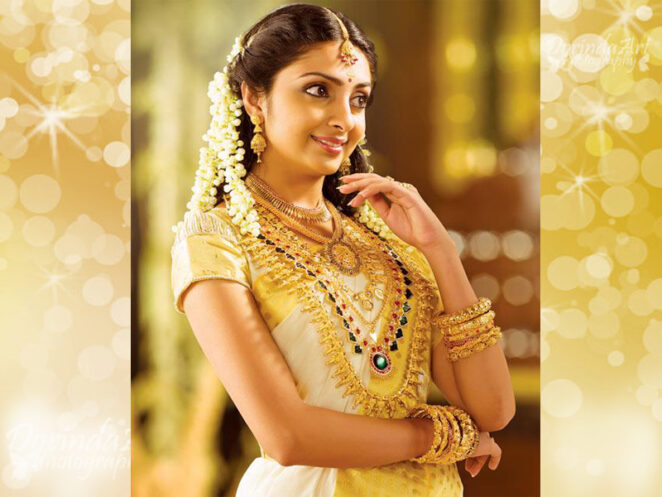 Kerala traditional jewellery is known for its artistic work.

Embossed with depictions of gods and goddesses from the temples in south India, Keralan necklaces are crafted from vast quantities of gold, it makes for a great investment for the Keralan brides-even more than Diamonds.

Kerala jewellery, (especially the Keralan necklaces) is popular not only because it looks gorgeous but also because it evokes religious sentiment among people.

Also known as Jasmine buds necklace, this necklace consists of a series of jasmine petals that are stranded together in a Gold chain.

While the first design consists of Jasmine petals made with Gold only, the second one contains Jasmine buds adorned with both Gold beads and gemstones.

Mulla Motu necklace makes an important of Kerala jewellery collection, therefore, it makes for a must-have jewellery style for every Keralan woman.

This is a type of necklace containing glass stones that are crafted in the shape of the tiger’s nails.

Did you know that the word Pulinakham stands for the nails of a Tiger? This is why, this necklace contains small pendants in the shape of the Tiger’s nails.

This style of Kerala traditional jewellery is usually adorned by Keralan women with the traditional Keralan saree.

A Karimani mala is the Keralan Mangalsutra worn by South Indian women. It contains black and gold beads.

It is worn by married women in Kerala

Next on our list is Kasu or laxmi mala.

‘Kasu’ stands for coins and ‘Mala’ stands for a necklace, therefore Kasu Mala or Laxmi is crafted with a lot of coins that are that are embossed with the figure of Goddess Lakshmi, hence the name of Lakshmi Haar.

Kasu Mala is one of the most-worn styles of jewellery in Kerala.

A Palakka Mala is a ‘leaf’ necklace and it consists of Emerald gemstones.

The design of a traditional Keralan Palakka mala usually resembles a leaf having a gold border.

It is one of the oldest designs of jewellery in Kerala.

A traditional Nagapadi Thali comes with a design that resembles the hood of a snake which is why it is called Nagapada Thali.

It consists of Emeralds/rubies that are strung in a Gold chain.

This is just a regular Gold necklace containing a Gold pendant. Made with pure Gold, this beautiful piece of traditional jewellery of Kerala is worn by the Keralan women on a daily basis.

Adorned with the nature-inspired patterns and designs, Poothali is a Gold necklace containing rectangular pieces that are adorned with intricate flowers and leaves.

Made with hands, this necklace is a must-have jewellery style for every Keralan woman.

So, these were different types of Kerlan necklaces.

Which of these Kerala Jewellery styles did you like the most? Drop comments and let us know your favorite pick.