What constitutes an entertaining film these days film is subjective, especially amongst the written broadsheet press critics. When you work your way through all the previous Oscar movie winners on DVD in the autumn its Hollywood fast-food like Tripple 9 that ends up more satisfying. Countless Oscar winners have been as dull as a winter’s day in England over the years so sometimes you need Kate Winslett playing a tongue-in-cheek Russian moll with huge hair to liven your day up. Liam Neeson cracking skulls is far more fun than three hours of Ralph Fiennes quivering lip in The English Patient. Triple 9 is very much not an Oscar movie but very much what normal people like at the cinema.

In Atlanta, Georgia, hardcore criminals Michael Atwood (Chiwetel Ejiofor), Russell Welch (Norman Reedus), and his brother Gabe (Aaron Paul) have big advantage when it comes to committing crime – the other two members of the gang are corrupt cops, Marcus Belmont (Anthony Mackie) and Franco Rodriguez (Clifton Collins Jr.). It helps when you are going to rob a bank to have an inside angle on the security, response time and the actual investigation that follows, which may or may not involve the corrupt cops.

Their next job is retrieving a safe deposit box in a busy high street bank. They get the goods but bungle the robbery escape. The box contains information that could overturn the recent conviction of a Jewish-Russian Mafia boss, who they are working for. When Michael brings the safe deposit box to the boss’ wife, Irina (Kate Winslet), she won’t pay them their money and gives Michael and his crew another mission, which involves breaking into Homeland Security and stealing data discs on her husband, an offer they do not want to take up but cannot refuse. To ‘persuade’ them to take the job, the mafia goons torture gang member Russell and dump him with fatal wounds in front of the crew, forcing Michael to mercy-kill Russell in front of them, traumatizing Russell’s junkie brother Gabe. 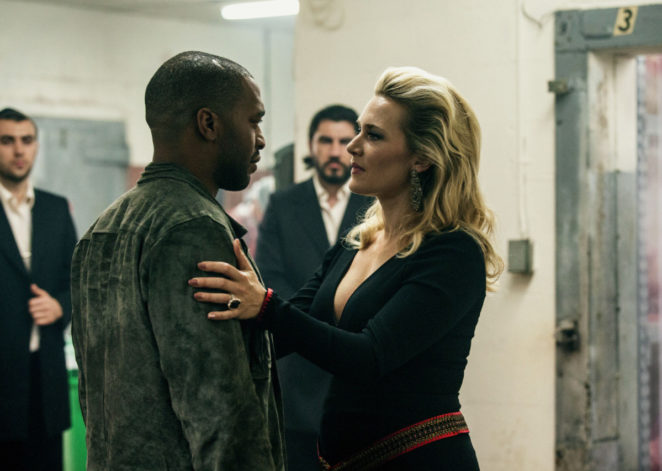 The gang members have to go forward with the job or they are next, as they to figure how to rob a high security government office. The plan is to cause a ‘Triple 9’ scenario, which involves teasing most of the cops to just one location in the city, leaving the Homeland Security office more exposed. Marcus nominates his new detective partner Chris Allen (Casey Affleck) to be the mark, unaware of the police corruption. Chris’ is the nephew of senior detective Jeffrey Allen (Woody Harrelson), the police force working on the bank robbery case. This could get complicated.

For a film cast that includes two Oscar winners: Kate Winslet and Casey Affleck and two Oscar nominees: Chiwetel Ejiofor and Woody Harrelson it’s not that special. Its $20 million budget pulling back just $23million suggests the general public agree. It just lacks that something for such a pedigree cast. Training Game…Inside Job…and other cops films have added pedigree through big stars that attract better scripts and bigger action budgets but everyone here just on set for the paycheck.

It’s a good concept and you go with it for a while but soon drops into cliché around cops, robbers and pony tailed Russian mobsters. Winslett’s big hair clearly took more time to prepare than her lines and you can only scratch your head why the likes of Chitwel Ejifor and Casey Affleck are in this film. Aaron Paul most definitely should not be in this film as he is in no way a movie star. Seeing him peeping over the dashboard in Need for Speed is still hilarious.

On the whole though its good popcorn fun with a pumping soundtrack slick action sequences. The plotholes are big and the cast regularly fall into them but in the pursuit of chest bumping action cinema it races along and the cast suitably whacked in order of wrong doing and betrayal. It’s not one of those films on Rottentomatoes.com with a low rating that you should ignore though but just enjoy it for what it is, throw away action fun.

Times of Israel –‘At the end of the day, stories need to be about characters, not types. While nothing that ought to inspire a letter writing campaign from the ADL,”Triple 9″ fails to make it past shorthand.

The Mail –‘In recalling 1970s Hollywood classics such as Dirty Harry, The French Connection and Serpico, it is heartening to see that Hollywood still has the guts to deliver a film where redemption is a dirty word’.

NY Post –‘There’s a blue-chip cast running the gamut from A (Casey Affleck) to W (Kate Winslet) and terrific action sequences in Triple 9 – but in the end, this relentlessly nihilistic crime-caper thriller adds up to less than the sum of its impressive parts’.

Globe & Mail –‘Though compelling in the acting and cinematography, Triple 9’s plot is by the numbers and about nothing’.

New York Times –‘One of those productions in which much of the creative energy has been funneled into gaudily inventive displays of violence’.

The Times of India –‘Apart from an unnecessary profusion of subplots, you’ll likely find this heist-thriller to be quite satisfying’.