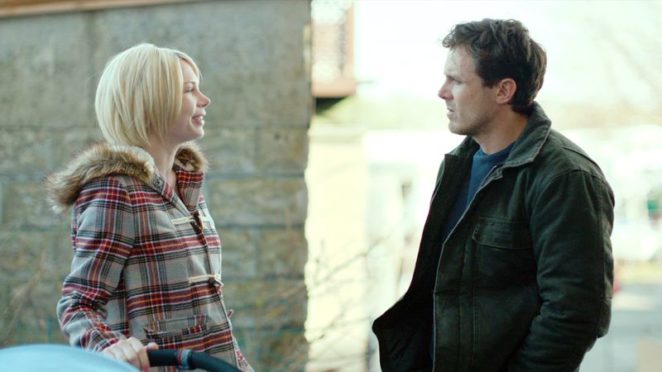 Manchester By The Sea is one of those unashamedly blatant melancholic Oscar chasers that drags on and on for more ‘acting time’ that we have all seen and rented because it did indeed go on to win Oscars, one for star Casey Affleck and one for writer and director Kenneth Lonergan, the directors fourth nomination finally successful. Michelle Williams picked up a Best Supporting Oscar nomination for just 12 minutes in this movie. Casey, of course, is a hell of a lot better actor than his brother Ben. Ben, believe it nor not, has won two Oscars, Best Film for Argo and apparently writing Good Will Hunting with Harvard buddy Matt Damon. This movie would be the first film distributed or co-distributed by a streaming service – in this case, Amazon – to get an Oscar nomination for Best Picture, one of six for the film. The screenplay was featured in the 2014 Blacklist; a list of the “most liked” unmade scripts of the year.

Moody Lee Chandler (Casey Affleck), a janitor and handyman in Quincy, Massachusetts, lives a solitary life in a damp basement apartment. His tenants are as moody as him in the apartment block where he works and it seems to be getting to him, fighting in bars and disrespecting his residents his tension relief. He appears depressed and rudderless.While shoveling deep Eastern Seaboard snow, Lee receives a phone call that his brother Joe is in hospital and it’s serious. He rushes down to a place called Manchester By The Sea where the family grew up to learn his kid brother has suffered a cardiac arrest on the family boat and dies as Joe arrives at the hospital. He could not say his goodbyes. 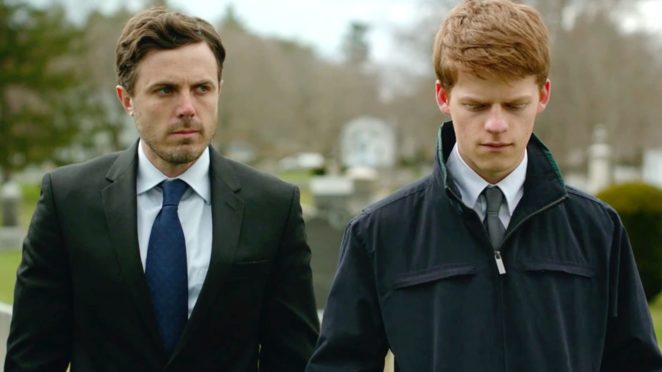 Lee insists on breaking the news to Joe’s 16-year-old teenage son, Patrick (Lucas Hedges), who, as you would expect, doesn’t take it well. The responsibility of the death is forced upon Joe and he tries to make funeral arrangements. But he will have to stick around for a bit longer as the ground is too hard to bury his brother and Joe will need to be kept refrigerated until then so some forced time to spend quality time with Patrick, especially when Lee learns that Joe had named him Patrick’s guardian when they hear the will. It’s expected the kid will move to Quincy with him, not what the kid wants, of course. But Lee does not want to stick around and through flashback to his previous life in Manchester we begin to discover why. Lee was once married to a local girl called Randi (Michelle Williams) with kids and not so depressed and Manchester had held good memories until tragedy struck.

As I say it’s yet another grim Oscar chasing movie as we explore themes of depression, loss and grief. Critics raved about it for Affleck’s solid lead performance of hubris and quiet anger and the film machine gunned with big awards. It’s one of those films that get those awards as the other lot gave it those awards.I didn’t think it was that special and being moody all day is not really what depression is about but how the movies always portray it. Pretty ludicrous that Michelle Williams got on Oscar nomination for her brief moment holding a pushchair and as good an actress she is the writers should have given her more here and room for her character. It looks like the director chopped a bit there.The plot is non linear in places as the story unfolds through flashback, and that way we learn the characters pain and guilt, why the kid is in such a mess. But the reason seems forced and unlikely at times. It’s that point in the film you realize the director is trying to look at a way to end his character study. If this was a movie with a lesser cast doing just as good with the material you could see it not being nominated. It’s almost like it’s been made just to set up Casey for an Oscar run, like a complex play in American Football as the team try to get their kicker in range of the posts.For its $8.8 million budget it did $77 million back and so considered a decent success as those themes are not exactly crowd pleasers, very much a film buffs movie. It’s one of those movies you can only really say did well because of the Oscar wins, or fans of the actor, and no one to really recommend unless you get right into the minutia of film. One to wait for TV guys.

-Audio Commentary-Lonergan talks about his movie on the layered rack-Deleted Scenes –Not that many-Emotional Lives –Talking about the story and depression and loss.

South China Morning Post –‘Adopting a jigsaw-like structure, as past memories impinge on the present, Lonergan layers his characters with an enviable emotional complexity’.

Sight & Sound –‘With an outstandingly icy Casey Affleck as a mournful loner drawn back into his old fold, Kenneth Lonergan’s New England community study is a masterful, darkly American account of a heart in the dead of January.

Financial Times –‘A drama of rage and grief that stands on the brink of the inexpressible’.

The Guardian –‘This is about life as it is lived in the real world, with unassuageable pain, loose ends untied, life lessons unlearned. Life with no narrative closure’,Little White Lies –‘Each scene brims with self-contained humor and drama, regardless of whether it moves the story along or simply fills in background colour’.

The Independent – ‘That Manchester By The Sea is so absorbing is down to Lonergan’s painstaking directorial style and to a superb Method-style performance from the lead actor’.

The Mail on Sunday – ‘It’s beautifully acted, particularly by Affleck, but so steeped in multi-layered misery that you do worry about its prospects at the box office’.

The Buffalo Times –‘Manchester by the Sea is perfectly observed in every detail, from its writing and performances (Affleck and Michelle Williams as his ex wife are locks for Oscar nominations) to its set decorations (someone understands the clutter of real life)’==========