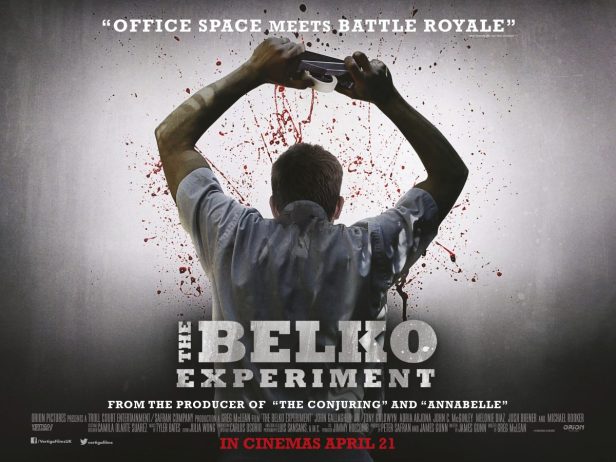 With a mass shooting a week in America this is probably not a film for those Americans who work in the Post Office (outside schools the most likely place for mass homicides in the U.S) or with disgruntled employers etc, The Belko Experiment a bloody gruesome horror from director Greg McLean that has you running for cover.

It’s a version of the brilliant Japanese movie Battle Royale (2000) and German movie Das Experiment (2001) and a reflection on a real experiment (without the body kill) testing human behavior, run by university psychologist Dr. Stanley Milgram. The 1963 experiment looked at the conflict between obedience to authority and personal conscience, essentially seeing if the general public would eventually severely hurt each other under experimental conditions if instructed to. The apparent willingness of adults to go to almost any lengths on the command of an authority figure in a white coat to inflict fatal electric shocks to people they could not see was worrying.

The employees are arriving at Belko Industries, a non-descript office block in a rural area of Bogotá, Columbia. But today is different, unfamiliar armed security guards are turning away Colombian employees and only allowing the overseas workers in, mostly American ones.

Due to the high chance of westerners being kidnapped, for insurance reason, all employees have to agree to have a tiny tracking device implanted in the base of their skull in case they have to be tracked down and rescued and Belko industries not too keen on paying the big ransoms. This is explained as being common in Colombia due to the high incidence of kidnapping.

Once the eightieth and final employee shows up for work, an unfamiliar voice on the intercom instructs the employees to kill two of their co-workers, or else there will be consequences. Thinking it’s a sick joke, employees are unsure how to react until, that is, giant metal shutters lock-down the building so no one can leave.

They ignore the announcement at first, as you would, believe it to be some sort of security test. But after the first deadline ends and two people were not killed; four employees are murdered in front of their terrified eyes. This is very real and no why out of the building. The group is told that unless thirty of them are dead within two hours, sixty will be killed. Will they turn on each other or figure a way out? Surely no one will be allowed to tell the tale. Let the killing begin!

Greg McLean’s corporate ‘shoot em up’, although awarded an average rating online, is well worth a watch. It looks great on its $5 million budget that did £10 million back and one of those films purely a victim of poor publicity that should have seen it earn five-fold. With no Blockbuster rental stores anymore and this dumped on page seven of your movie packages then no one will nowhere to go to see it.

It’s pretty bloody and borderline gruesome as brains are blown out and the employees turn on each other with whatever implement is to hand. It may be some sort of take on the gun lobby in America or corporate power but whatever the message the body count is high.

There is just enough humor and unrealistic scenarios to not make it unwatchable but still entertaining all the same. I suppose you could do an experiment on why humans love to watch horror movies so much. I guess experiencing the peril from a far from fictional life ending situations and then being able to turn them off is the key.We watch Grand Prix racing because we may see a serious crash, not for the cars going around and around so much.

It’s a good watch if you like your psycho horrors violet and bloody and OK plotting. The ending is a bit naff but ticks a long nicely to that unsure point and remains engaging and taught. The cast is one of those line-ups that is familiar yet no actual stars in it although a film that you will watch another year down the line and some of those actors now famous. Check it out guys, if you have the stomach.