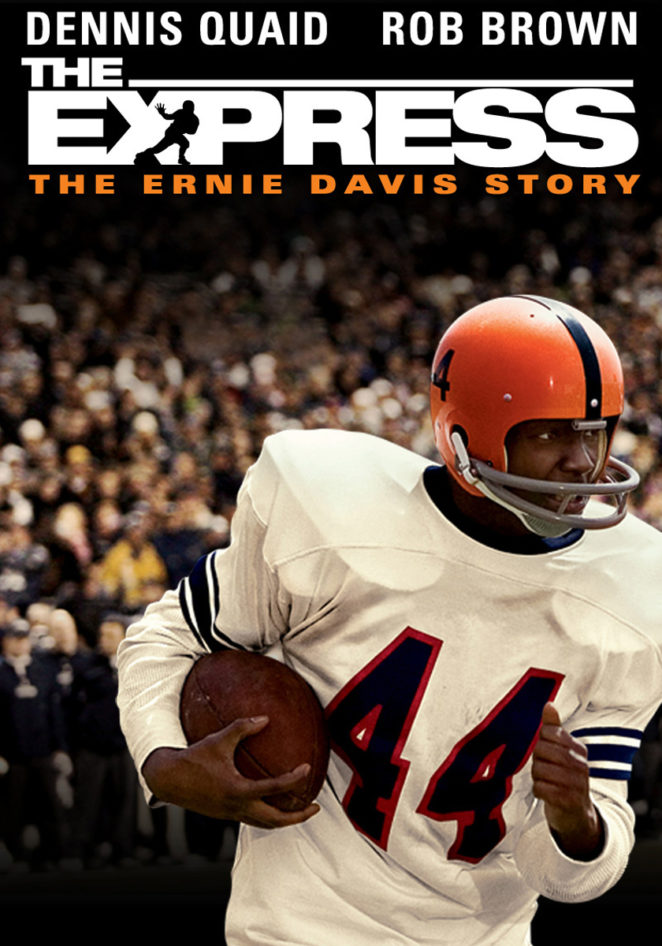 The Express, based on the book ‘The Elmira Express’, is an adaptation of the life of Ernie Davis, the first black American college football player to win The Heisman Trophy, and went on to be drafted into the NFL as the number one draft pick. The Syracuse University running back was one of the pioneer black American sportsmen along with the likes of Jackie Robinson in baseball that broke the color bar in professional sports in racially divided America. He could run the length of a football pitch in just over ten seconds, and fully kitted up. He was the first black player to be ever drafted by the Washington Redskins, whose owner made it the franchise mission not to do have black players but forced to by the NFL in the year of 1962.

As with all American biopic’s on sports they do tend to embellish them to get the audience onside and this film not short of its controversies and untruths in search of drama. Portrayed Scenes of racist vitriol between Syracuse and West Virginia University in the film were completely fictiticious and veered toward outright slander, said one West Virginia newshound from those times. The game was actually played at Syracuse’s own Archbold Stadium, the Orangemen’s home field at that time in New York state, not at West Virginia as portrayed in the film.

Young Ernie Davis (Rob Brown) is growing up in Pennsylvania with his uncle, Will Davis Jr. (Nelsan Ellis), in the late 1940s during a time of racism and discrimination across America. Ernie’s dad died when he was young and so lives with his extended family, including his grandfather, Willie ‘Pops’ Davis (Charles S. Dutton), who guides and educates the boy. Davis’ mother (Aunjanue Ellis) is living with another man in another city but eventually returns to say that she has remarried and can now afford to raise Ernie at her own home in Elmira, New York. Here the little Ernie Davis joins a kids Football League team and catches the eye on the field as a running back.

We flash forward a few years later, Syracuse University football head coach Ben Schwartzwalder (Dennis Quaid) searching for a running back to replace the legendary Jim Brown (Darrin Dewitt Henson), off to the NFL. Schwartzwalder is very impressed with Davis after viewing footage of him playing for Elmira Free Academy. The coach convinces Brown to come with him to try and recruit Davis, which they do.

At the start of the 1959 college football season, Davis is an instant success and his incredible pace and weaving through the bodies skills lead Syracuse to some big victories, beating UCLA to conclude the regular season unbeaten. The team decides to play the 2nd ranked Texas Longhorns in the Cotton Bowl Classic to make the Championship game. But Davis is roughed up in the game, racially and physically, and picks up a knee injury, forcing the coach to bench him. But this game is bigger than football and Ernie is determined to finish it as the crowd turn and the Syracuse lead falls away.

There is no doubt Americans do the sport biopic better than anyone else. It’s also true they do a lot of them, lots of American heroes to make movies about. They have the feel good factor in spades and square-jawed All American heroes you want to root for, some of them Europeans have never heard of, or their stories. I had not heard of Ernie Davies. I know a little about American football but to average 7 yards as a running back is pretty darn good. That is a lot of first downs.

The cast are all perfectly fine and no one better than Denis Quaid at this stuff, the white coach who sees the error of his ways around black folks in the bad old days. OK, Kevin Costner, of course. But because there are so many of these movies they end up all rather samey and cliché, be it an enjoyable cliché in the way Kung Fu movies work, for example. This one didn’t get the fourth star though as too similar to all the other films I have seen that concrete on the race divide in American sports and just about worth a look. At least I know all about Ernie Davis and his short but inspiring life.

It cost $40 million to make and did just $10 back, the American audience perhaps rather tied of the genre and regularly told sporting stories and so let this one be. White people get tired of this apologizing for back then and black folks don’t bother watching the movies anyway because their parents lived that stuff and don’t need reminding. They want Marvel like everyone else their age.