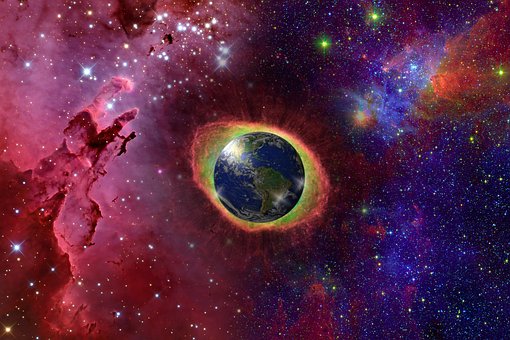 “The Cosmic Game” was written by Stanislav Grof in 1998. The subtitle is ” Explorations of the Frontiers of Human Consciousness”. I am not reviewing this book, just giving my thoughts on it’s basic premise. The basic premise is this: that there is only one consciousness, and this consciousness creates the world for itself out of boredom or loneliness. This consciousness plays “hide and seek” with itself, purposely forgetting who it is, and playing all the parts in the “cosmic game”.

I would find this scenario to be truly terrifying. To be the only being in the universe all alone for eternity. What would you do knowing this? Probably create worlds for yourself so you wouldn’t get bored constantly. I would want to forget my situation too. I think this would be more like dreaming or fantasizing. Creating a mental video game or simulation to play different roles to spice things up a bit. And if you didn’t remember that you were in a game, you would be taking a break for a while from eternity and being alone.

I would want to create pleasant worlds and pleasant experiences. I wouldn’t want to put myself in bad situations. This is the main reason I don’t believe the premise of the book. It seems unrealistic to me. I don’t see why anyone would want to torture themselves. The author says eventually you would get bored if everything were always pleasant. But I disagree. I don’t think you would get bored with it, especially if you could create many different worlds and scenarios.