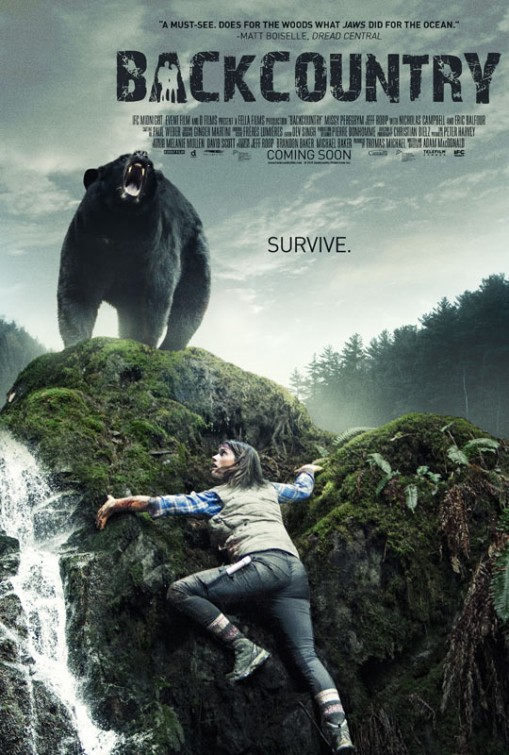 So Blackfoot Trail (called ‘Backcountry’ in the North American market), a film by Adam McDonald, a seemingly run of the mill lost in the woods with nature horror that is defined by a truly harrowing scene. There is something about horrors in the wilderness that heightens the fears. You get into the mind of a killer when you see those primal fears and isolation on film, one such moment in the Aussie film Wolf Creek, that comes to mind. This moment catches you out in Blackfoot Trail big style.

Attractive ‘thirtysomething’ urban couple Alex (Jeff Roop) and Jenn (Missy Peregrym) are going camping in the Canadian wilderness in the glorious Canadian Fall. Alex (Jeff Roop) presents himself as a seasoned outdoors-man to impress his girl while Jenn is a corporate lawyer, and so not. Although reticent she agrees to let him take her deep into a National Park to one of his favorite spots – the secluded Blackfoot Trail to a beautiful lake.

Out of their SUV and a canoe trip down the river later, on their first night deep in the forest they have an unsettling encounter with Brad (Eric Balfour), an intimidating alpha male hiker who quite fancies Jenn, and may or may not be following them. Unnerved, Alex’s need to get going and reach Blackfoot Trail only heightens.

As they push deeper into the woods, minus Brad, Alex begins to get them lost but stubbornly refusing to admit that. After three days the path disappears and they are now hopelessly lost without food or water. Despair begins to set in and she turns on him and calls him a loser for getting them lost, the differences in their careers, decision making, class and gender coming to the boil. But their problems are about to get a whole worse as a huge and hungry black bear shows up looking for a meal.

It’s a slow boiler but once they are in the forest the music becomes more foreboding and the visual clues and hints begin to be thrown at us on what they will have to survive. It’s pretty basic filmmaking in that sense but tension is suitably applied by the environmental threats and solid acting as the guys move deep into the forest, and you know how spooky forests can be when the breeze begins to stir and dusk sets in.

As I say there is one horrendous scene in the film that is incredibly realistic and scary and so not suited to kids in any way. As you get holder horror films lose their edge and so few things freak you out. This will. 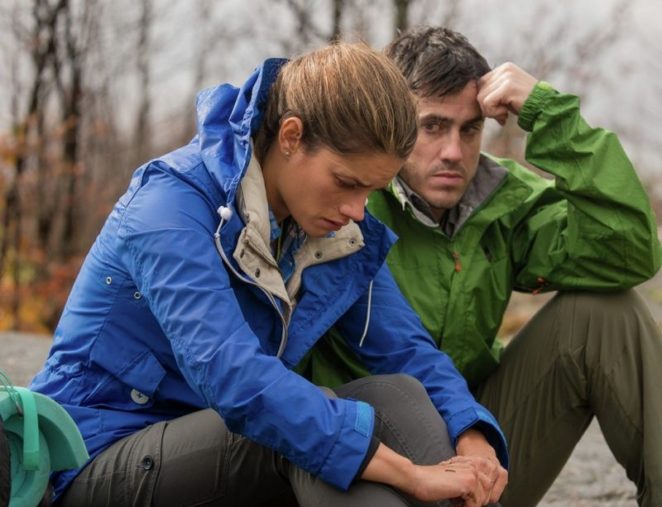 Missy Peregrym, an ex model, is really good at being frightened and puts in a cracking performance here and one to watch out for. She looks a talent. Her turn has more clout to the more conventional male role alongside as there is more than a hint of a feminist theme running through this film as her character becomes more emancipated and his becomes feebler as the peril piles up.

I enjoyed it to a point and an above average peril in the woods movie and with a few gentle curveballs and twists it remains taught and thrilling throughout. It’s not one of those corny horrors where people are killed in order of cool as the pretty girls end up in tight denim shorts and T-Shirts but a genuinely well crafted film worth your time, if it pops up on your movie package or TV.