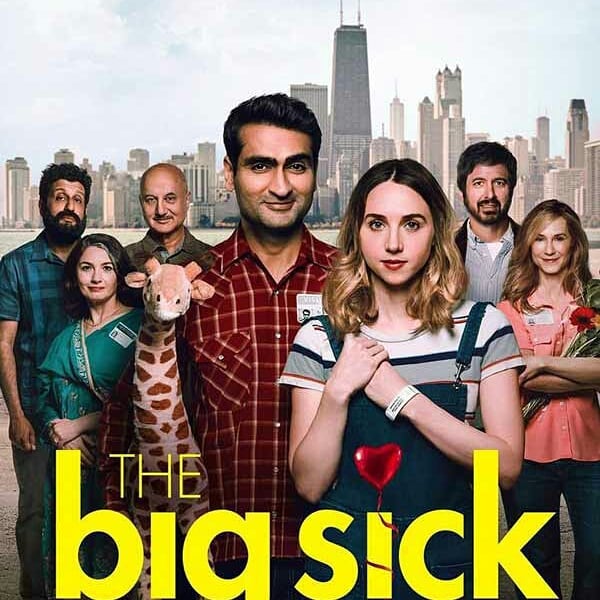 The Big Sick was the darling of the smaller film awards season in 2017, its central South East Asian character and on-screen interracial relationship sending left wing critics eye balls spinning with admiration, as if some great conspiracy by the right to keep this sort of thing off the big screen had been going on for decades. Studios, of course, put stuff out they know will sell rather than show any racial bias. Japan corporations do own most of the Hollywood studios after all. Is Bollywood not the biggest cinema in the world guys? The Big Sick was so popular with the left after its Sundance screening it was sold for a record $12 million dollars at that festival.

The breakthrough Best original Oscar screenplay nomination for star and writer Kumail Nanjiani seemed to be based more about his ethnicity than writing something very special. It’s a co screenplay credit with partner and stand-up comedian Emily V Gordon, a semi autobiographical movie in tone, location and family. But the film got traction with Hollywood and Marvel want him as the token Asian in The Eternals to hit yet another market. We do need more Asian presence in Hollywood though. Come on Sony, Panasonic and Viacom and co…

Kumail (Kumail Nanjiani) is a Chicago Uber driver by day and stand-up comic by night. At one particular show he is heckled by an attractive girl. The two get talking after and Kumail quickly ends up in the sack with Emily (Zoe Kazan) and so a relationship thereafter.

Kumail, being South East Asian, is from a conservative family and expected to have an arranged marriage and mom Sharmeen (Zenobia Shroff) always invites potential brides around to family meals when he visits his parents for Sunday lunch, whether he likes or not. If she finds out he is with a white women then he will be disowned. This, of course, is apparently not racism in Asian circles, dad Azmatt (Anupam Kher) on mum’s side. Kumail does his own thing and now, over 30 and unmarried with kids, clearly brining shame the family.

The romance moves on and then breaks up, around the time Kumail wants to move to New York to pursue his comedy dreams, the Saturday Night Live people showing interest in some of his troop. But this will mean splitting with Emily as they drift apart. But she gets seriously ill and he is called by the hospital as next of kin, that serious, needed to tick some forms to admit her. Then the parents show up to take over the situation as he is pushed away by the mother (Holly hunter) but deep down he still loves her and want to support her and dad (Roy Romano) taking a liking to the funny Pakistani man as they begin to bond.

It’s no Harold and Kumar Get the Munchies but perfectly fine. There are some clever jokes and some cheap racial identify ones around Uber and pushy parents ect and the confidence to risk a 911 joke or two from Kumail Nanjiani. The obsequious 98% from Rottentomatoes is more about supporting a mildly funny film around an Asian comedy of manners than anything very funny on screen. It does resort to most romantic comedy clichés at times. I did laugh now and then but once it moved away from the rom-com side and started to drag towards two hours I was waiting for it to end.

It’s very much a film of two halves, the first about a groundbreaking Hollywood romance between a funny Pakistani guy and a funny white girl (Jewish in real life) and the second part a more serious movie about illness and social and racial class, which was less interesting. Kumail Nanjiani is a Pakistani by birth but did cast his mom’s favorite Bollywood actor as his dad. An India marrying a Pakistani is even more taboo. If the Asian audience can put that and other inconsistencies aside then there are laughs for them to. I think you will enjoy it and one to catch on TV.