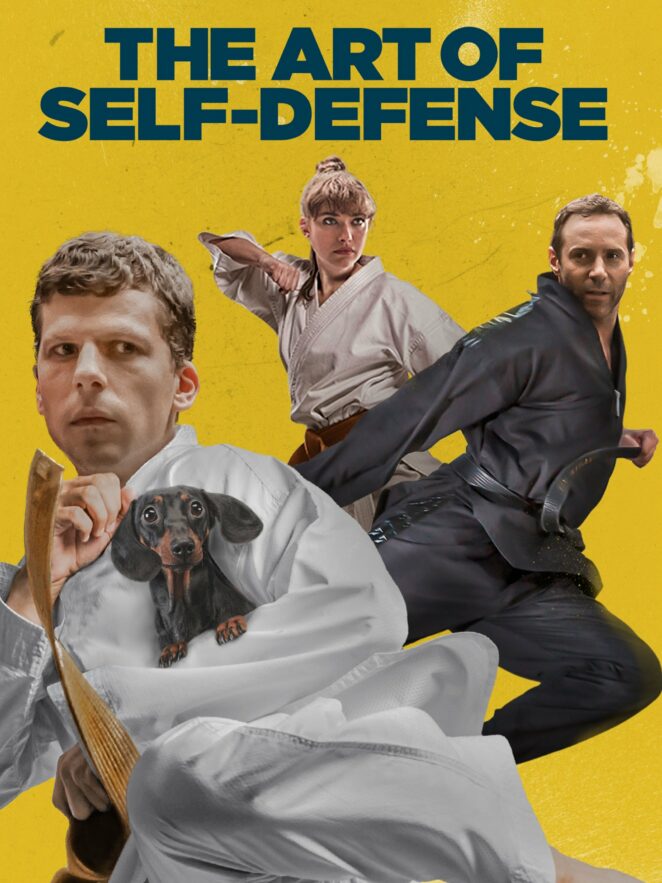 So here is a quirky little black comedy from little known writer/director Riley Stearns. Geeky Oddball Jessie Eisenberg said I’ll do it and so it got made. Eisenberg seems to have type cast himself as himself and not one for costume dramas or playing deep characters. He is basically the same in every movie.

Its black comedy that gets blacker, and pretty violent to. It’s not for kids. Its mid budget indie but nice to see Imogene Poots of 28 Weeks Later fame get a go, a truly beautiful young actress in her day.

Timid and slightly autistic accountant Casey Davies (Eisenberg) is at odds with his work mates as he is society. But his life is about to get worse when he is violently mugged at night by a motorcycle gang. He wakes up in hospital with some nasty injuries and soon self isolating with fear and agoraphobia, ordering a firearm for to protect himself.

As days become weeks off work to recuperate mind and body he happens upon a karate club and enrolls as a beginner. The dōjō is run by ‘Sensei’ (Alessandro Nivola), the alpha male taking a shine to young Casey.

Casey begins to enjoy classes and perform good enough to catch the eye of his classmates and teacher, soon promoted to a yellow belt. But both Anna and Henry are snubbed for their next belts, causing tension in the ranks.

Casey finally reveals the reasons to Sensei on why he is taking classes, earning an invitation by Sensei to partake in the revered night classes. But the whole atmosphere changes as the classes are severe and violent , Sensei hoping some of the alpha male atmosphere rubs off on Casey to be more assertive in life, which it does big time. But Sensei has an ulterior motive for his night classes and Casey about to be inducted.

Although the twist is pretty obvious half-way through it’s still good fun. For a black comedy it rather violent in the third act and some. A pseudo Chuck Norris character gives it a bit of 70s B-Movie martial arts punch and Eisenberg doing his stick perfectly well.  It’s funny in a way that you are surprised you are laughing at snapped bones and vicious beatings and nice that this doesn’t go the way of a meaningless romance to drag it all out.