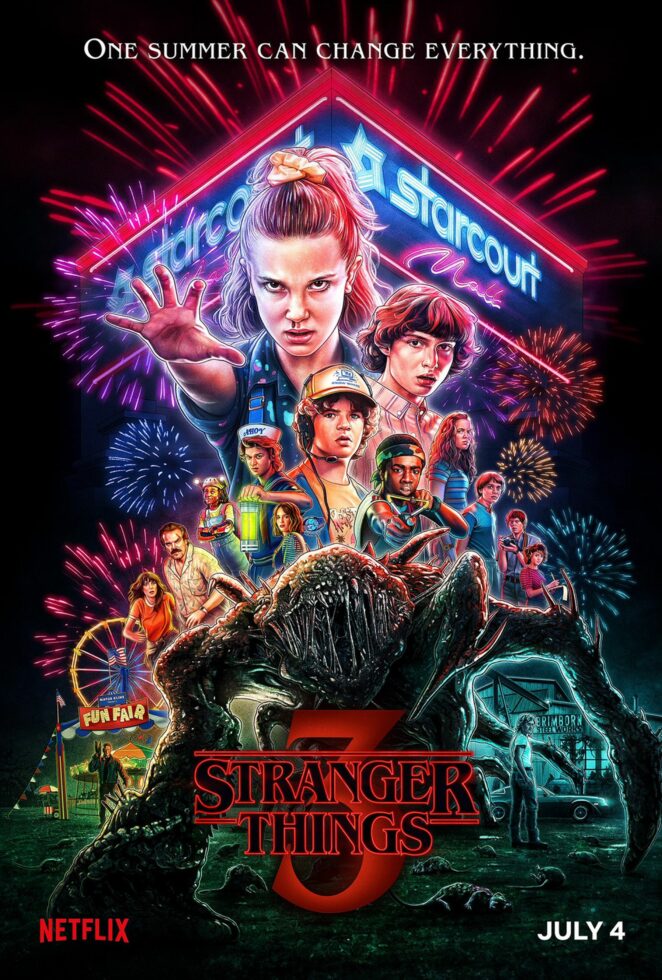 Stranger Things was one of the top shows that bought a new audience to Netflix, a fun Sci -Fi drama that was suitable for a family audience , assort of mix of horror writers Stephen King and Dean R Koontz meets Stephen Spielberg. Season one and two were great fun and so season three upon us. Season 4 production has been delayed by the coronavirus.

The star is Winona Ryder, she of the Brat Pack of the 1980s, the only one that can actually act in this TV show, its major weakness. But that’s part of its charm or, at least, until this season.

Season one recap saw a young boy get kidnapped in the woods in small town America and his friends and family rally around him with the local cops to find him, which they do, encountering supernatural forces in the dark and dangerous forest. Season two expands on the darker side of things as the kids and sheriff and friends encounter the same evil, bigger and badder, once again.

So, after Deputy Sheriff Jim Hopper (David Harbour) saved the day things have calmed down in Hawkins, Indiana.

Joyce Byers (Winona Ryder) has lost her boyfriend and slowly falling for alpha male Sheriff after he saved her son Will (Noah Schnapp) who went missing in the first season. But Will is still connected to the beast somehow and can’t seem to shake it.

Wills school mates Mike (Finn Wolfhard), Dustin (Gaten Matarazzo), Lucas (Caleb McLaughlin) and Max (Sadie Sink), and the mysterious El (Millie Bobby Brown) are stll tight in their gang and have just picked up a Russian signal on their ham radio, and stranger things start to happen in Hawkins involving magnetism. Something is brewing again.

Mikes big sister Nancy (Natalia Dyer) and Wills brother Jonathan (Charlie Heaton) are still a couple and Nancy working for the local newspaper, investigating more stranger goings on involving rats, fertilizer, and old people. She wants to go deeper but her editor won’t let her for some reason.

The kids decide to take the matter of the Russian signal into their own hands and start investigating, Nancy and Jonathan also on the same trail, handsome Steve Harrington (Joe Keery) pulled into the mystery. But town Lothario Billy Hargrove (Dacre Montgomery) seems to acting odder than everyone else and changing for the worse. It seems something is under Hawkins once again that should not be there.

Not great I’m afraid and Stranger Things fans were not happy. The acting is terrible and you just want to slap the Jim Hopper character with a big wet fish, his performance like he is high on Novocain after a bad toothache. The kids are only 12 or so but into girls and relationships as if in some sort of telenovela from Brazil. When I was 12, I had no interest in girls.

The story is OK to go with the Cold War 1980s theme but soon gets silly as the prepubescent kids overpower the Red Army. There is too much hammy stuff in the plot in-between and by half-way you know you are not going to enjoy this as much as you did the first season.  The best thing remains the brilliant theme tune.

What was fun about Stranger Things was that Stephen King creepy mystery in the woods storytelling wit fleshed out character and that Spielberg Sci-Fi intrigue but those two things completely lacking here. It was just by the numbers Netflix box-ticking delivery with sneaky product placement the main mission this time. Sorry guys but a no from me.