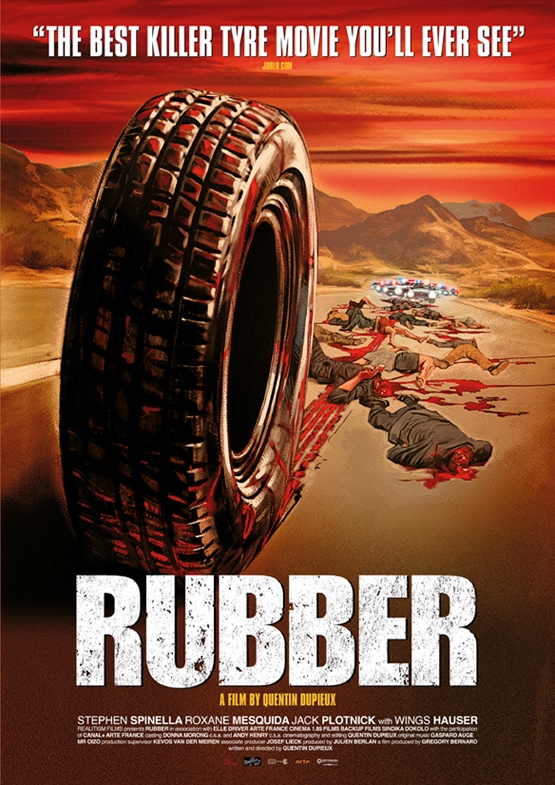 So who fancies a bonkers B-Movie about a runaway killer car tire with telekinetic powers? Thought so. How can you resist that!  Well B-Movie director Quentin Dupeiux couldn’t and the tires were auditioned and here we are. There is a waver at the end to say no tires were harmed in the making of this movie.

I like a good B-Movie as they don’t have to be any good to be good. They can be deliciously silly like this one and easily entertain. The cast are obscure as they are unknown and I like the way the films fundraisers also feature in this for some dry humor cameos.

We are in the baking California desert as an officious and out of place man stands with a clipboard as a police car appears on an empty road and navigates some strategically placed dining chairs for no apparent reason. An officer gets out of the car boot, Lieutenant Chad (Stephen Spinella), and addresses an assembled crowd of film geeks ready for their interactive film experience. They are all given binoculars to watch the action.

The film begins with a car tire coming to life. It dusts itself down, finds its tread and rolls around a bit. Once it’s confident it can stay upright it rolls forward to go exploring. At first it curiously squashes a plastic bottle, then a scorpion, before making a funny noise that allows it to blow things up, first up a glass bottle, then a wild rabbit and then a crow, splat, before hitting the highway.

As an excuse to get a hot girl in the movie a car drives by with one in, sexy Sheila (Roxane Mesquida), who has to avoid hitting another vehicle driven by a Mr Hughes (David Bowe) coming the other way when the tires gets on the road.

At a motel up the road both divers book a room. Here we meet the owners, staff and guests. But the man in the truck has upset the tire and bigger things begin to explode.  The tire finds an empty room and watches some TV. Meanwhile in the desert the selected audience is enjoying the film, many theories on what’s going on as the first head explodes in the motel.

For just $500,000 budget its surprisingly good fun and well shot. It’s really clever how they get the tire to roll on its own and do strange but simple things and also surprising how funny a rubber tire can be. It’s a silly but smart movie, so says the dust cover and 100% right. The acting is tongue-in cheek and the plot making no sense although some sort of clever point made about movies in general there. In fact it has that film geek in-joke humor throughout.

I enjoyed it enough, however silly it got, and a suitable ending to set up a sequel that will need a whole lot more money and vision. There is also a neat mechanism in the film around who is a watcher and who is an actor that was quite clever. In fact there is probably a whole lot better movie here if they had the budget.

It’s a sort of tribute to the film ‘Scanners’, which older ones will remember and a seminal horror of the seventies, the so-called video nasty era.  Getting a tire to blow things up with mind power is just the best fun idea though. If you have 90 minutes to waste then waste it on this. You won’t see another movie like this for a while.