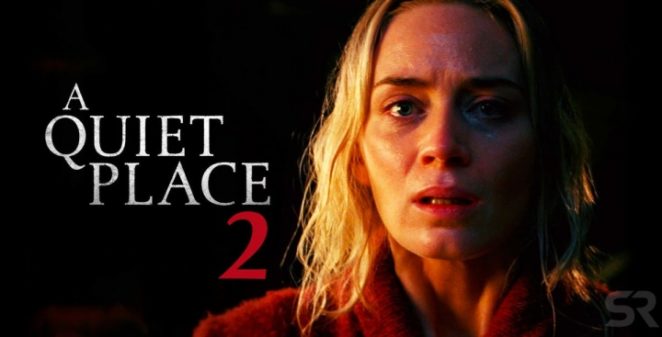 A Quiet Place is that rare thing, a horror film nominated for an Oscar. For some reason comedy and horror films got little Oscar attention over the decades but after the win for Best Original screenplay for Get Out (2017) things are changing. This, like that, is very good film in the genre and if you saw this in the cinema you are probably still recovering from the experience, a multilayered and gripping film not to be missed.

It stars Emily Blunt and John Krasinki, who are married in the film and in real life. However scary it is, somehow how it got away with a PG13 release, which enabled it to make some serious movie for a horror film, its $17 million budget earning twenty-fold back at $340 million. Not for the feint-hearted.

We are in the backwoods of contemporary Maine, USA and some sort of alien invasion has taken place. The Abbott family have survived it somehow and cautious and set in their methods to keep surviving it. We guess the invasion has happened everywhere else on the planet but this is their home now.

The blind aliens hunt by sound and so if the humans make any noise at all its likely to attract the monsters, which happens early on in the film as the Abbott family are on raiding mission in a nearby deserted town for food and supplies and make a big mistake .

A year on and mum Evelyn (Blunt) and dad Lee (Krasinski) and their young son Marcus (Noah Jupe) and deaf daughter Reagan (Millicent Simmonds) are still alive and living under constant fear of attack. Any noise, and I mean any noise, brings the monsters to eat them. They have learnt sign langue and use it all the time now. Being pregnant is a big problem, of course, and a crying baby the last thing they need right now. But the baby is coming and the aliens are listening

DAD has equipped their rural homestead with CCTV to keep an eye on the kids and the alien threat and trying to develop weapons to fight the monsters weakness, if he can find one. If you shoot them you make a loud bang and you know what happens next. One day they will make a mistake and so no longer need a solution.

As I said, for some reason horror and comedy films rarely attract Oscar attention, this one, ironically, nominated for Best Sound Editing at last year’s Academy Awards. If silence mixed with menace unsettles you and you are of a nervous disposition then steer clear of this one. It has just 25 lines of dialogue, and 38 minutes into the film for the first spoken word, taught and tense for 90% of it. If you think about the scenes in Alien when it’s hunting them down in the roof space it’s kind of like that.

The film hits the ground running with the set up, the viewer soon hooked into this unsettling silence. Blunt and Krasinski put in strong performances as the over protective parents facing such a constant threat. The actress who plays the deaf kid is really deaf and so an achievement just to be there in such a technical and challenging movie.

Ultimately the film is less about monsters and more about the bond between parents and kids and that constant worry of where they are and what they are up to and the dangers they face that face all mums and dads. The dynamic of a deaf kid being stalked by a monster who hunts on sound is terrifying. Saying that it’s not the most exciting and interesting horror sci-fi of all time as its stays fairly claustrophobic on that dynamic. Well worth seeing though and one of the films of 2018.