Washington: The United States threatened Turkey for further sanctions on not allowing its pastor to be released. US President Donald Trump has warned Turkey once again in his tweet, If the American pastor is not released, further sanctions will be imposed on Turkey.

President Donald Trump said Turkey has been receiving benefits from the United States for years, But now the American pastor Andrew Buronson has been arrested in no issue , which is increasingly increasing stress among the two countries. 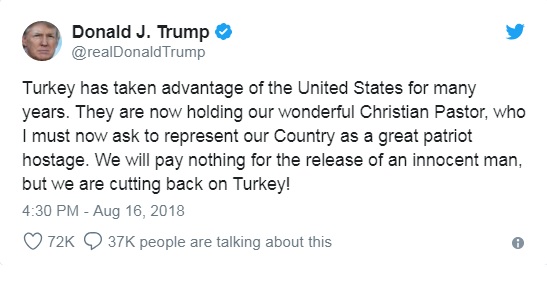 The US President added further that the US would not pay nothing but an innocent American pastor arrested in Turkey, but Turkey would have to suffer more Khomija due to economic sanctions, for which Ankara is ready. Due to the sanctions, the value of the Turkish Currency Lyra  is already going to be a breakthrough,which Turkey’s economy is undoubtedly compensating. On the other hand, Turkey boycott US products and has announced to use local currency instead of US dollars for trade transactions.

Be Clear Andrew Buronson, a US- American pastor, was detained in a crime-related military coup in 2016. And recently the Turkish court ordered them to move home from the prison. The United States has strongly condemned and demand for the pastor release.