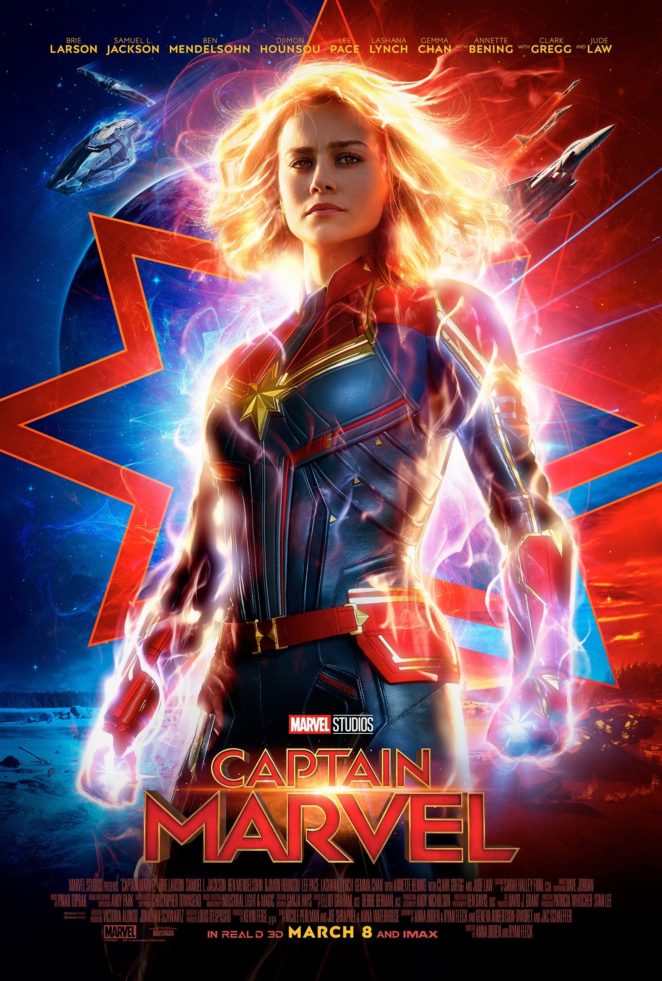 So you all know the massacre that is Marvel v DC Comics on the big screen, Wonder Woman and Batman the latter’s only real hits. In contrast, Marvel has made $21 billion dollars in the last twenty years, The Fantastic Four, arguably, their only flop. DCs Top 10 movies are all Batman and Superman ones with Constantine their most successful venture outside those two iconic heroes. Wonder Woman is good but it hasn’t really boosted DC. It’s not pretty.

Now, while Captain Marvel isn’t the first movie with a female superhero, it is the first to be written primarily by women, for women. Previous ones have been Supergirl (1984), Catwoman (2004), Elektra (2005), and Wonder Woman (2017), all written by men. I’m not a comic book fan and I thought Captain Marvel was a bloke, to be honest, until the film came out so, as a bloke, accepting the way the wind is blowing. Unlike Supergirl, Catwoman and Elektra, this is a huge hit and just passed the one billion dollar mark from its $175 million dollar budget. I think it’s fair to say Brie Larsson is going to be back as Captain Marvel, unlike the other three female superheroes.

In a galaxy far far away on the planet of Hala. the center of the powerful Kree Empire, Starforce warrior Vers (Brie Larson) suffers from acute amnesia on who she really is and keeps having nightmares involving an older woman (Annette Benning) that she appears to know but not know. Yon-Rogg (Jude Law), her mentor and commander, trains her to control her superpowers for active combat, while the Supreme Intelligence, the artificial intelligence that rules the Kree, insists she keep her head in check and concentrate on the Kree’s effort to defeat the Skrulls, their shapeshifting enemy.

During a mission to rescue an undercover agent infiltrating the Skrull, Vers is captured by commander Talos (Ben Mendelsohn). The Skrull leader wants to probe her memories, a clue that will lead them to Earth. But Ver escapes in a Skrull pod and crash-lands in Los Angeles.

Her presence on Earth attracts fledgling S.H.I.E.L.D. agents Nick Fury (Samuel L. Jackson) and Phil Coulson (Clark Gregg) attention, interrupted by a pursuing Skrull attack. In the chase, Vers recovers a crystal containing those extracted memories and befriends Fury to work out the puzzle who she really is. After a trip to a top secret American military base It appears she has been to Earth before as a one Carol Danvers. But who do you trust when surrounded by shapeshifters and you don’t yet know your true enemies?

I enjoyed this enough to recommend it. As it’s written by a woman there is that Wonder Woman feminist thing going on to it and a hint of lesbian in her. Emancipated female warriors are all the rage these days, Star Wars and The Terminator even succumbing to appeal to 51% of the world population. Nothing wrong with that Girl Power on screen as the main male characters become the villains and submissive but not in every movie guys.

Plenty of action and very much a comic book movie about setting up a franchise in the way The Thor movies do, for an example. The Captain Marvel character is very much a genesis character in the way Wonder Woman is and good to see Jude Law dip his toes in the superhero genre. We also arrive in the Marvel Universe when the Nick Fury character is just getting going so room for him to have his own movie.

Its good fun and a decent story and solid writing in the comic book method work well in this case. It’s not trying to be too clever like Wonder Woman. I can see a scenario where other Marvel characters can appear in the sequel although no times travel elements to her story yet. It’s a good stage to introduce some lesser known ones. I think Marvel fans will be pleased with their new lady hero.