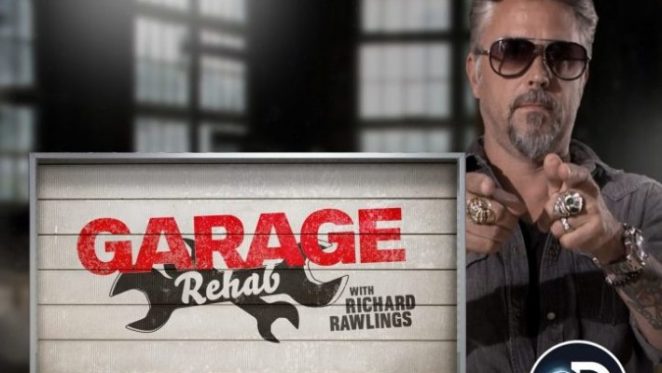 So, if you watch American TV then you know there are a ton of cool car shows out there. Garage Rehab is hosted by money making machine Richard Rawlings, who is building an empire right now after the success of his hotrod rebuild and flip show Fast N’ Loud, which made him a household name in America, his show regularly anchored in the top 100 there. After 13 series and 100 shows over the last 9 years, season 14 is nearly in the can. He is confident alpha male dude that thoroughly entertains, his Gas Monkey Garage TV shows a must see for blue collar guys in the U.S.

During the run we have enjoyed some spin off shows: ‘Garage Rehab’, Changing Gears and ‘Misfit Garage’, the later staring his previous and popular goofball ex employees who left – or who were fired – from the Gas Monkey Garage. ‘Changing Gears’ starred Rawlings ex master mechanic and 13-year business partner Aaron Kauffman from Fast N Loud, who probably felt Richard was getting a little bit too big in what was a fairly uneven partnership (especially in their pay packets) and left to do his own TV thing. But Garage Rehab is all Rawlings baby and heading for its third season. No real sign of Aaron doing so well.

Rawlings is now on $50,000 per episode of Fast ‘N’ Loud the last time they looked at The History Channel and so had cash to burn on his new venture. The idea here is he invests in struggling garages around the country and gives himself a set budget and time plan to turn those businesses around using Rawlings experience, contacts and ego, between $100,000 and $200,000 grand of his own money, per garage, supposedly. It’s a bit like what Gordon Ramsey did with restaurants over the years with Kitchen Nightmares.

His co-stars in the builds are big and burley construction project manager Russell J Homes and auto-shop consultant Chris Stephens. Russell is bear of man who generally bellows at the poor unsuspecting garage owners and staff to get the work done on crazy short timelines and Chris the more considered artisan. Richard is the money man and pops in now and then to do his bit on camera and make sure there is no overspend or sort out setbacks, and make sure you are watching. I have only seen season one so far of two and 16 garages have been refitted.

It quickly becomes clear they are only using certain sponsors product and equipment in each of the garages across the country as they have signed deals with those companies to promote their products and so Richards costs tumbling from the off. I doubt if he pays much for the air compressors and welders etc. I guess he and the other two guys are being paid to appear on the show and so costs down some more. It appears they are genuine deals to buy into the businesses and if the businesses fail after the refits I guess Richard owns them.

Generally the builds go well and the garage owners can’t complain with the best kit and Richards’s connection at their disposal to make money. The catch-up show tells you how they got on six months later. The cynic inside of me suspects Richard invested in so many garages in the hope some failed in the better locations – like the Key West one – and he could take over them across America on the cheap. Clearly most are failing because the owners are not very good businessmen. He has six Gas Monkey bar & grille across America and so has big ambitions for his garage empire. There was an episode that showed the softer side of him when he rehabbed a charity garage that helped to get injured veterans back to work but generally he is all about the Benjamin’s and the beer.

What I like about Rawlings shows are although contrived to make a good TV experience the guys do repair and hotrod the cars and so actually make something at the end of it. Some of these shows have actors on and the car deals never really happen and it’s all a bit fake. Here the boss and workers have a passion for cars and most of it’s seems real. Obviously the car builds are edited down like the garage builds but that’s understandable. As long as there is a real project and transaction at the end of it then fair enough. Not a lot of Garage Rehab seemed fake and you felt it was achieving something in turning these businesses around and so more rewarding to the viewer. Very few of these documentary shows do achieve anything.

It’s entertaining enough and although the rebuilds a little samey and we don’t get told important stuff, like what the interest rates are on Richards loans and how much hidden debt there is , standard business stuff. But we are for the feel good stuff and a great show to watch as you eat your evening meal. More power to Richard Rawlings I say.