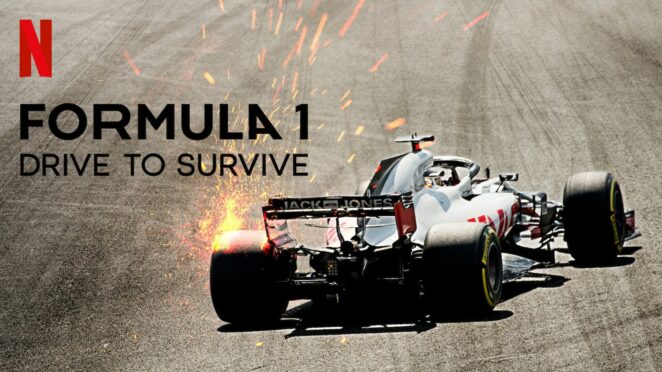 At the moment there are a lot of these behind the scenes documentaries on big sports teams and various sports around – the – world. I have watched some on Manchester City, Leeds United and the Australian cricket team and there are also ones on American football teams and European soccer sides like Madrid and Dortmund, mostly on streaming channels. If you are a fan of those specific teams you can get some enjoyment from the shows but most of the content is controlled to put the club in a positive light and so rather dull at times. But with sport like Premier League in England you see so little of the players lives so any insight is interesting. F1: Drive To Survive is very different, by far the most entertaining and revealing of the lot, plenty of swearing, bitching and hi resolution crashes as the Formula One drivers and teams do anything they can to win.

As far as the driver’s team spirit goes it’s the most un-team team sport going as team mates try desperately to beat each other on the track to keep their glamorous contracts. Mercedes and Ferrari refused to take part in season one but on board for season two.

This is the second season of the Netflix show, the first season on the 2018 season very entertaining and surprisingly candid. Season two is on last season and so has a more contemporary feel to it, especially as the 2020 season likely to be cancelled due to the Corona Virus. It’s not quite as bitchy as season one as the drivers and team learned their lesson from season one and so more guarded here. But they also know it’s a way to make their point on other drivers and team bosses so still some good stuff here. Episode two which concentrates on the Hass team and their angry team Principal Günter Steiner is great viewing. His two drivers Magnusson and Grosjean are near the back of the grid and desperate to finish in front of each other to keep the seat, and by any means. Grosjean has a reputation for crashing, one of the highlights of season one.

Season two sees Ferrari and Mercedes get involved and as always with documentaries it’s in the nuance here, micro glances between new boy Le Clerc and Vettell, priceless. Lewis Hamilton and Bottas not so complicated as Lewis clearly number one driver at Merc. I love that stuff. Danny Riciardo’s smile lights up the room as ever and Christian Horner’s comments on him leaving Red Bull for Renault somewhat telling. Horner likes the limelight a lot for a team boss and married a Spice Girl to prove it. He thinks Daniel left the team as he didn’t fancy the challenge with Max Verstappen, the young Redbull hotshot.

It’s not as good as season one but well worth a look in the lockdown. You may as well get your money’s worth from Netflix. Any insight behind the shades in sport is worth discovering so you can understand the rivalries more on the track. The HD slow motion crashes are thrilling and unseen footage and on track voice stuff also interesting. But it’s the pit lane stuff from the bosses that makes you smile the most and fills in all the gaps from the previous race calendar on why the drivers did what they did. There has been some criticism for Netflix on trying to edit in ‘team mate‘driver rivalry but you can see its real on screen if you look objectively.