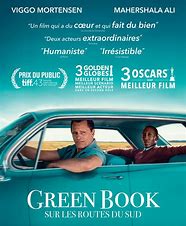 So ‘Green Book’, the Best Picture and Best Original Screen Play Oscar winner of 2019 and also the Best Supporting Actor Oscar for Mahershala Ali, his second in two years but very much lead actor here alongside Viggo Mortensen, a couple of fine thespians in top form. Due to the recent protests about black actors not getting enough recognition in Awards season Mortensen was hoofed aside and not nominated to give Green Book and Ali a clear run to the finish line and so it proved. Like Moonlight in 2017, it was worth the grand prize.

It details the true story of an employee and employer relationship between Mahershala Ali’s character Dr. Donald Shirley, a revered and incredibly talented black pianist, and his Italian-American driver Tony Lip, played by Mortensen, the film centering on a tour of top venues in the still racist Deep South in the 1960s. The Green Book is a guide for African-Americans to find establishments that would serve, bed and board them.

As it dealt with race the usual critics surfaced to call it a ‘white savior’ movie where the white bigoted character gets redemption through his actions around a more superior black character. The Shirley family insisted the two men were not friends and just an employee and employer relationship. They were not consulted about the film and took umbrage to it but plenty of evidence and recordings to suggest they were indeed friends and stayed that way.

Rough and ready New York City doorman Frank “Tony Lip” Vallelonga works the doors at the Copacabana Night Club in downtown Manhattan. When the club is closed for renovations Tony is at a loose end for a couple of months. Some mob types want to hire him for some mob work but the club owner refers him to Dr. Don Shirley, a celebrated and eloquent pianist looking for a driver for his eight-week concert tour through the Midwest and Deep South. Don likes the plucky and potty mouthed Queens boy for some reason and, on agreement of Tony’s wife Dolores (Linda Cardellini), hires him, the plan to have him back with Dolores and family in New York on Christmas Eve. Don’s record label gives Tony a copy of the Green Book for the trip.

The tour begins in the Midwest then heading farther south. The two clash early on, Don rather stuffy and turns his nose up at his driver’s bad habits and insist he acts with more refinement around him. Tony is impressed with Don’s talent on the piano though and increasingly annoyed by the discrimination that Don receives from his hosts at the various venues, and around white people in general when he is not on stage.

It’s not long until they have a run in with the local rednecks and a knife is pulled, an action that draws the men closer together and a new understanding of each other’s lives as the incidents pile up…

Although the increasingly politically correct Academy felt obliged to give this film the Oscar, this time I think it’s worth it, as it was with the beautiful Moonlight movie. Black directors complain they don’t get noticed but clearly they can make great movies when they put their minds to it. Yes it ticks a few boxes on what Hollywood likes in award season, that of a life affirming true story, America golden age and strong lead acting performances but still an enjoyable film well worth seeing.

It’s a road trip movie as it is a bromance and a tale of mutual respect and friendships between two men called chalk and cheese. The gay pianist is torn by his immense talent and loneliness by trying to distance himself from racism and the shame of his sexuality whilst Tony is an uncomplicated working man who is inwardly as racist as the next man but does his job without letting Don know his feelings on their differences. It’s lovely character study of the business of being men.

It cost just $23 million to make and looks authentic on it and did back a healthy $239 million but the black American audience saying away because of negative and unfair reviews. I suppose it is a film aimed more at a white audience but these guys were mates and if the black community doesn’t want to believe that that’s up to them. Division is often perpetuated on both sides.