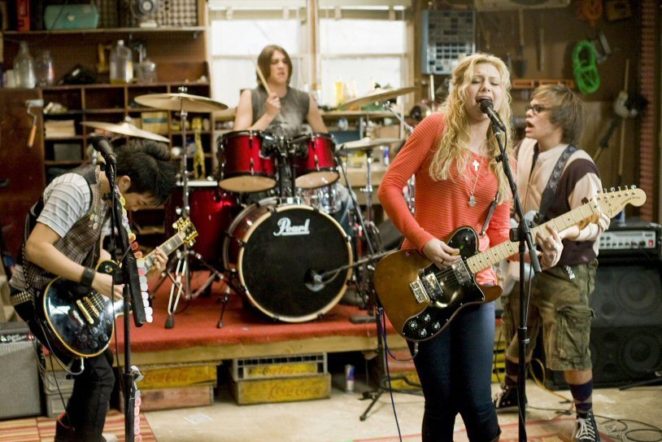 So Bandslam, an American teen high school comedy that’s actually worth writing about as just that little bit better than the 40 or so other in the genre that come out every year. But only a little bit better. It’s no Easy A but good fun. The film is a good ten years old now and so some of the relatively unknown cast mostly forgotten and some big stars, like Vanessa Hugdens, the Arianne Grande of the day.

The casting for this musical romantic comedy required that all the main actors could actually sing and play instruments. All of the vocals for this film were filmed live by each of the cast members who sang and played most of the instruments for the band scenes, director Todd Graff insisted on this authenticity to give it more energy. Its other claim to fame is it’s technically David Bowie’s last film although just a one minute cameo here. 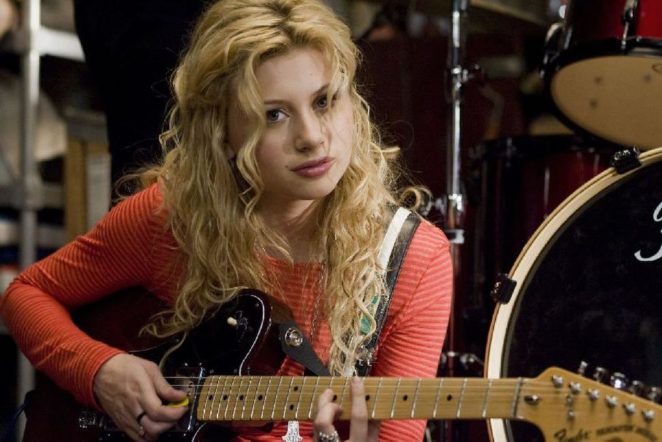 Quote – ‘School today was like Guantanamo with a lunch period’.

Geeky high school missfit Will Burton (Gaelan Connell) and his single mom Karen (Lisa Kudrow) are on the move from Minnesota to New Jersey to start a new life, which means a new school for Will and all the torture that goes with that in finding is place in the high school pecking order. But he is pleasantly surprised with his new learning environment and draws quick friendships through his love of music, a big David Bowie fan and his father in the music business. He writes a journal every day and emails David Bowie every week on his thoughts on music and life in general in the hope that he will reply and become friends. David never replies.

During school lunch one day he meets a pretty girl called Sam (Vanessa Hudgens). She tells him about Bandslam, an annual local music competition in which the winning band gets a recording contract. Will is also sought after by another older girl, Charlotte Barnes (Aly Michalka), who decides he would be good company, enrolling Will to join her in an after-school day-care centre. Charlotte is a talented singer-songwriter and asks Will to manage her band after he reveals his fathers connections. She has plans to take revenge on her show off ex-boyfriend Ben Wheatley (Scott Porter) and beat his band during Bandslam. 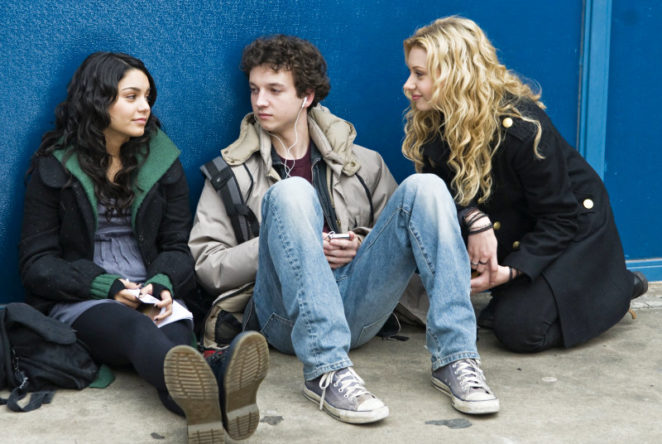 Will agrees to help Charlotte’s ska/rock band (called I Can’t Go On, I’ll Go On) which includes Bug (Charlie Saxton) and Omar (Tim Jo), eventually drawing in other school like-minded musical outcasts. Will knows his stuff and the band starts to sound credible and their chances for success raised somewhat. As Will starts to lose his loser-status around school he is distracted by both girls, reciprocated by Sam, not so by Charlotte, who is lot more manipulative than he knows as Bandslam nears and Wills big Minnesota secret revealed…

It’s not a classic but good fun. This genre had perked up in recent years with stuff like Nick and Nora’s Infinite Playlist and Easy A and si the puerile days of American Pie, thankfully long gone. These types of movies have a certain nostalgia for certain film fans like me who loved the halcyon days of the genre in the 1980s with those brilliant soundtracks and iconic young actors that have long since earned A-List status and so pleasing it stirred those memories.

Gaelan Collan is really good in the lead but due to this being promoted to a younger age group with a PG pink cover it didn’t do the money it should have and sunk Collan’s career, a bit of TV work and one film in his last 11 years, the ironically titled ‘The Secret Lives of Dorks’ his last movie. It is fair to say he was from a musical background though and is currently back there.

Bandslam will appear to its older PG Disney target audience and not really a rom-com in its truest sense. It’s not that young teen comedy as advertised to be fair. They got that very wrong. I would re release it to get it noticed. It’s not the brilliant Clueless either so not smart or sexy that way. But the tunes are fun and hi-energy stuff and the kid’s talented singers and musicians in that School of Rock way give this an extra thump. I laughed here and there andit pops up on TV then well worth a watch guys and girls.