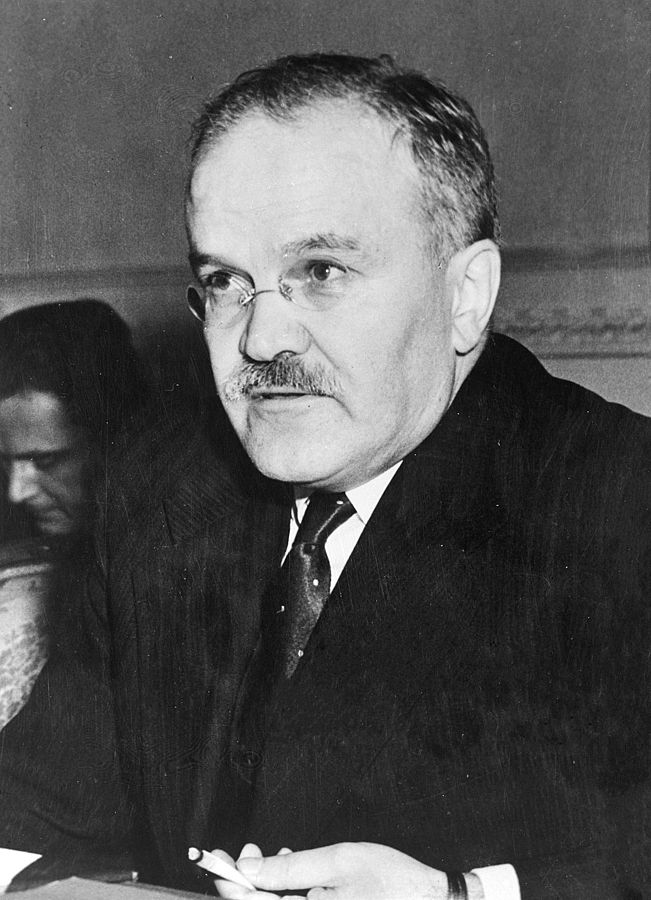 Most people will not need to be told that a Molotov cocktail is not a drink, although some of the earliest ones were actually made in a vodka factory! They are in fact home-made weapons of war.

A Molotov cocktail is (usually) a glass bottle filled with an inflammable liquid, such as petroleum spirit, with a rag or something similar stuffed in the top. When lit and thrown it is likely to explode on landing, thus spreading burning fuel towards anyone unfortunate enough to be in the way. A Molotov cocktail is therefore a cheap and crude weapon that is often used today when street protests against the forces of law and order get violent.

Molotov’s name is not attached to the “cocktail” because he invented it, given that he did not do so. However, the term was originally used as an insult and has stuck ever since. Few people today will know who Molotov was, and his name is only remembered for something that only had an indirect connection with him.

Vyacheslav Mikhailovich Skriabin (1890-1986) was a Russian revolutionary who took the name “Molotov” (meaning “hammer”) and led something of a charmed life, not only surviving to an advanced age (96) as the last of the Bolsheviks, but managing to do so through the era of Stalin’s purges of the 1930s. Only four members of the original Bolshevik government of 1917 achieved this feat, and Molotov did so by being one of Stalin’s most loyal deputies and a prime mover in instigating the purges. He was, in short, as unpleasant a character as Stalin himself. 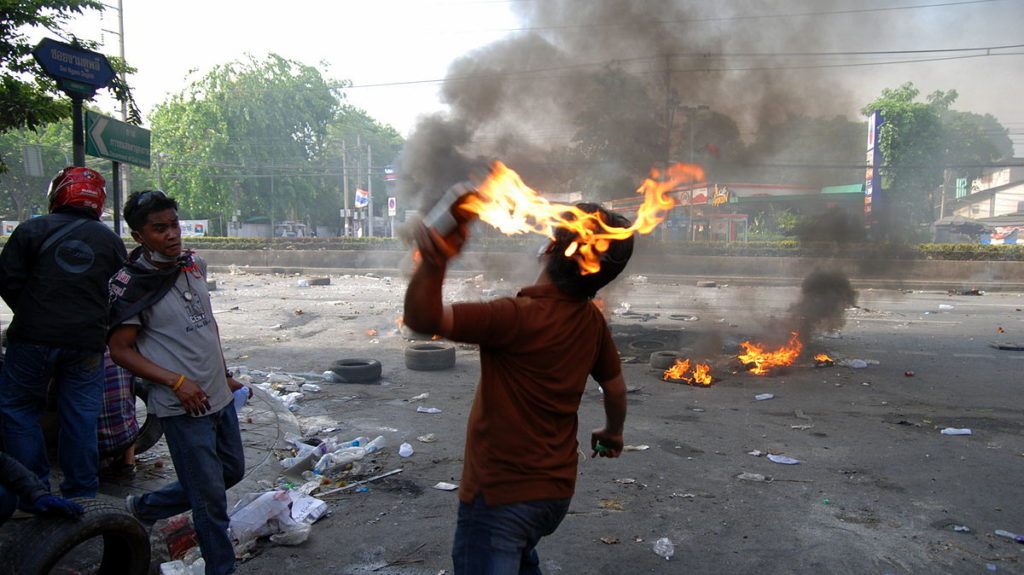 (A Molotov cocktail being thrown by a rioter in Thailand. Photo by “Takeaway” licensed for general use)

The Finland campaign and the resulting “cocktails”

As Soviet foreign minister, it was Molotov who was responsible for launching the “winter war” against Finland in November 1939, not long after the outbreak of World War II. The Soviet Union believed that it could simply help itself to Finland while the rest of Europe was otherwise engaged, and on paper this looked entirely feasible. The Soviet forces were vastly greater than those of Finland, both on land and in the air, but they were led by commanders who were relatively inexperienced, given that the purges mentioned above had stripped out a large number of competent military leaders, leaving the less competent ones to take over. For this, Molotov himself was largely to blame.

Molotov’s campaign against Finland was completely illegal and against the rules of the League of Nations, of which the Soviet Union was a signatory.

Molotov thought that he would get away with this action by pretending that his cluster bombs were actually food parcels that were being dropped to support starving people. In response, the Finns decided that such “bread baskets” deserved a decent “cocktail” to accompany them, thus the Molotov cocktail was named as a piece of black humour.

The device did not originate with the Finns, as it had been used to good effect during the Spanish Civil War that had concluded earlier that year. The Fascists led by General Franco had triumphed over the Republicans, who had used Soviet-built tanks that could be disabled by the use of well-placed petrol bombs. If they worked in Spain, they could also do so in Finland.

Some 450,000 Molotov cocktails were assembled in a vodka factory and thrown at the Soviet invaders. They were not the only weapon that the Finns had at their disposal, but they proved to be very effective. The Soviets eventually had to sign a peace treaty, after 103 days of fighting, having gained only part of their original objective.

The Finns had national pride on their side and a determination not to be defeated by the forces of the giant next door. Their reputation as guerrilla warriors was greatly enhanced by their conduct during the winter war, of which their use of the Molotov cocktail was an important part.

It is ironic that the name Molotov might have become known only to historians had it not been for its borrowing for a device adopted for his defeat and used by revolutionaries and rioters ever since.