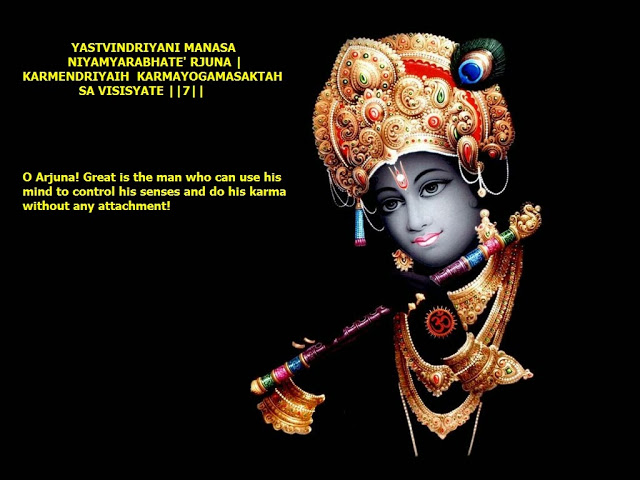 “Whenever I discuss anything with you about any facts of life, you take it to spiritual tangent and explain it to me”, said Sagar. “Is there a specific reason for that or that’s the way you are?”, he continued. “I mean you are so much influenced by his words and thoughts, and I am not against it but just curious to know, why so?” I said, ” They say that A man is known by the company keeps, so I love to carry BhagvadGita with me wherever I go. Be it my Office or any other place. Reading it daily answers almost all of my questions and makes me feel relaxed. It changes the way you think because you start thinking the way Lord Krishna wants you to think.”

Interrupting me in between he said, “Are you kidding me, I don’t believe that. So, you mean whatever you explain, that is because of what you learn from BhagvadGita? Because I think that there are questions of which answers were impossible to be discovered even by the most talented and genius people who were born.” I said, “Faith, my dear friend”, I said. “Faith, is what you need to have deeply rooted within you whenever you believe in someone or something. Whatever situation you are in,  in your life, or whatever problem you have ahead of you, the answers are all there in the Sacred scriptures, and BhagvadGita in one of those Sacred scriptures gifted by God. It is like Lord Krishna is not teaching to Arjuna but to you.”

“Well, that’s what you think, I don’t buy that, if this would have been a truth then why all the people don’t carry a copy of Sacred scriptures, as per their religion, with them like you do. Okay, you read it daily, so you answer my question.”  “Ofcourse, why not! Let me know whatever question do you have and I will let you know the answer”, I said.

He made weird gestures with his face, and then said, “How can I become God?”

That made me silent for a moment, but he continued, ” Because when I will become God, I will be already aware of answers of everything and anything t that will happen in my life , self realization kind of.” Then with his eyebrows he created a question mark which was waiting for me to answer his question. Trust me, I didn’t had any answer at that time, I thought may be If I read it again keeping his question in my mind than I will surely get an answer to this. Busy throughout the day, tired at night I slept keeping that question in my mind and slept.

It was around 4 AM, which is very well known as “Amrit Vela”  which we can google to find out what it means, usually known for best things to happen. I woke up, felt thirsty and so went to have a glass of water. While sleeping again, suddenly I heard a sound of flute. That was quite weird to me because everyone else was sleeping peacefully when I went to drink water. Than who was this? I opened my eyes as the sound was even more audible, as if someone was playing flute exactly next to my ears to wake me up. But unfortunately I was not able to see anything at all. No, not because it was dark but that sight was so bright as if thousands of suns being present at the same time.

With fear and Excitement mixed in my voice, I said, “Who….. who are you?”  I was not able to see anything else but within a fraction of second the brightness disappeared, and I was able to see someone standing but not facing towards me. He turned slowly, the flute didn’t paused even for a moment. Finally I was able to see him as he turned towards me. I was speechless because… IT WAS “HE”…………… to be continued…

“You, me and Lord Krishna” will be very dear to me as it is filled of some amazing facts that anyone would love read. This article is a great effort that I have made with the help my friend Sagar and The Supreme Being Krishna, to make positive changes in the life of people. Remaining part will be in the next article….. Thank you 🙂