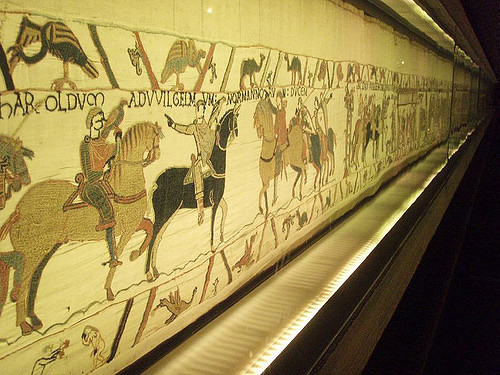 The Bayeux Tapestry is a fascinating relic from the 11th century, not least because it provides a detailed pictorial account of the Norman Conquest of England in 1066. It can be seen today at a purpose-built museum in Bayeux (northern France), having formerly been displayed in Bayeux Cathedral. It is widely believed that it was originally commissioned by Odo, who was Bishop of Bayeux and half-brother to William the Conqueror.

One of the most remarkable things about the tapestry (so-called, although it is actually an embroidery) is that it has survived for nearly 950 years, given the violent history of the region during the intervening centuries. The Normans may have successfully invaded England in 1066, but Normandy has suffered invasions of its own several times since, not least during World War Two.

The tapestry is 224 feet long and 20 inches high. The story of the Norman invasion, which includes the supposed evidence that justified it, is told in fifty scenes in the central band. This also provides the evidence for what “every schoolboy knows”, namely that King Harold was killed by an arrow in the eye, although this incident has been subject to much debate. It is quite possible that the arrow was added some time later than the original completion of the tapestry, and that Harold’s death was not caused that way.

If you look at the borders you will find many things of interest, not least a depiction of Halley’s Comet that is known to have made an appearance in 1066 and was widely regarded as an omen that predicted a momentous event.

However, it is also clear that the makers of the tapestry, who are widely believed to have been English seamstresses, possibly working in Canterbury rather than Bayeux, went to town and allowed their imaginations to run riot. The borders contain some amazing images, including mythical beasts and scenes from Aesop’s Fables.

Somebody has worked out that the tapestry (borders and centre) contains pictures of the following:

I have seen the tapestry at Bayeux, but did not bother to count anything!