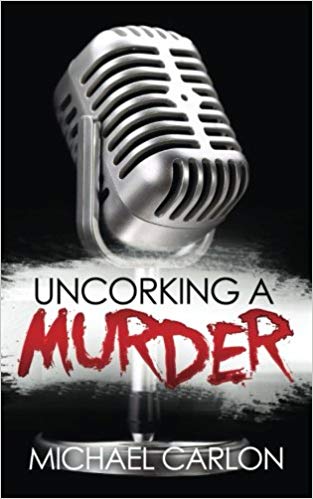 The multiplicity of viewpoints that feature in Michael Carlon’s investigative journalist come detective novel, Uncorking a Murder, will, no doubt, come as surprising to some, but they are voiced so dexterously by the author that the transition between the widely diverse characters appears to be done effortlessly. From the start of this text, the reader is immediately immersed in what appears to be the fallout from an unfaithful wife caught sleeping with her boss, a motivational speaker—a police captain booking into a seedy motel for the night, after having caught the two in flagrante earlier in the day. The story is by no means a straightforward one, as the figure of Captain Krunch of the Pompano Beach Police Department emerges as the alternate persona of Sonny Michaels, a leading scientist heading up the research division at a drug company that specializes in supplying drugs and test kits for Diabetes Type II sufferers. That such a persona only appears under conditions of great stress to Sonny, who suffers from dissociative identity disorder, is of particular importance to the plot. The trigger for this particular disassociation is Sonny’s discovery of what appears to be a revolutionary cure for diabetes, one that he is aware that his company, T2, which is on the brink of going public on the NYSE, would love to keep secret from the rest of the world. As Carlon puts it: “All eyes would be on T2 tomorrow once the New York Stock Exchange opened for trading and, at this stage, investor confidence was critical.”

That Sonny’s own company is now after him, and that he is effectively on the run, comes as no surprise, with the fast-paced nature of the script having the action bouncing around from Sonny himself, to his wife, who is extremely concerned, not without merit, regarding his personal well-being, and the bigwigs who are hot on his heels, eager to suppress any news of the new discovery, which would be likely to send the cost of their shares plummeting, thus ruining them financially. How the action embroils the corporate world in scheming and devious plots and planning, including the use of notorious thugs to intimidate the opposition, makes for enthralling reading. Seldom has the potential for the conniving and underhanded behavior of segments of the pharmaceutical industry been laid so bare. But wait—all the above is just the back story of what forms the crux of the second half of the book: the investigation, five years later, by a crack journalist and podcaster, Farrah Graham, and her lesbian co-host, Melody, of the above-mentioned farrago, the upshot of which was that Sonny was sent to prison long-term for having ostensibly murdered his wife. How Carlon unravels who the guilty parties really are, and who is, in fact, liable for the various misdeeds perpetrated against the backdrop of big business makes for fascinating reading.

The first in a series of whodunnits in the Farrah Graham series, Uncorking a Murder sets the stage for the later novels in the series, of which two, namely The Last Homily and Motel California, have already been published, and which are recommended reading if you find that you enjoy his writing. Clearly, this enterprising and worthwhile author has a great many other books in the wings, so if you haven’t tried his work yet, why not start with this one, and see how you progress. If you’re a lover of intelligent mysteries that get you thinking about the deeper issues of life, you’re almost guaranteed to enjoy Uncorking a Murder.