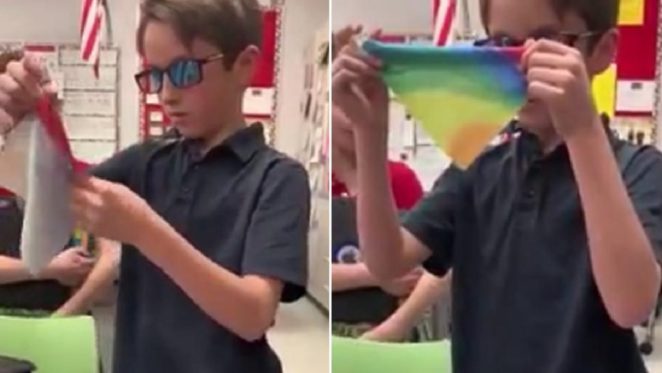 Thane whose name was not mentioned is a fifth grade student that attends an elementary school in Lone Tree Colorado who saved his allowance money to purchase from Amazon a special pair of glasses for his classmate Tyler Muhr who suffers from colorblindness.

It is not known if Tyler was born with colorblindness or it came while he was a youngster. Without his special glasses he could only see objects in black and white which did bother him a bit.

The price of the special glasses was around $100 which Thane paid of his own pocket as a favor to Tyler who is most likely his childhood friend when they became classmates at the elementary school they attend together.

The day when Tyler was presented with his special gift of getting his new glasses which will improve his ability to see objects came on Valentine’s Day.

After Tyler tried on his new special glasses and found out that his vision improved greatly, he thanked his friend Thane for being considerate to his needs to improve his vision.

The story was a huge hit on the Facebook social page after Tyler was videotaped trying on his new glasses.