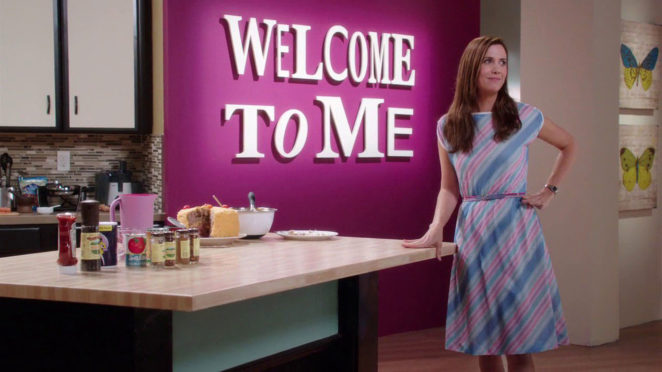 So here’s a quirky little adult comedy from Kirsten Wiig, one of a long line of older and genuinely funny girls ( let’s face it, there are not many of those) to graduate from America’s Saturday Night Live to the big screen, ‘Knocked Up’ her breakthrough movie and then the smash hit girly comedy Bridesmaids (2011) getting her well and truly known. Only girls should watch that movie by-the-way.

It’s from director Shira Piven, partner to Adam McKay, a fellow director who features heavily on the Kristen Wigg comedy movie tree but Piven’s first here. In fact if you shake that tree a lot of the same people come falling out. They changed American comedy for the better as we moved away from that gross out American Pie cr*p and onto a more cerebral laugh, this, certainly that. Welcome to Me is fairly unique folks and always a good thing when it comes to comedy movies, or, indeed, any movies.

Pretty thirty something Alice Krieg suffers from a borderline personality disorder but not in special car eor anything and doing her own thing, which is generally odd. Her TV has been on for 11 years straight and she is obsessed with Oprah Winfrey, recording her shows on VHS from the last 20-years.  She sees a shrink, Dr. Daryl Moffet (Tim Robbins), and her parents and family supportive of her ways, especially her best friend Gina Selway (Linda Cardellini), who has been there for her since high school.

Then one day she wins the state lottery, $85 million dollars no less, deciding to spend some of the money on her own Oprah style TV Show, inspired after she hogs the camera at the studios from the audience on a local TV station show. Station boss Gabe Ruskin (Wes Bentley) is drawn to her outburst on air and as the station is short of money entertains her crazy idea of the crazy lady having he own show on his station, billing her $150,000 a show to produce it. The Production Manager (Joan Cusack) thinks it’s a very bad idea to indulge in her but Alicia agreeing to the cost and away they go.

As bonkers as the show is (she comes out on a giant swan) it gathers a small local following, and then a wider one six shows in, dealing with aspects of her life, loves, illness and general wackiness. She quickly falls for the show’s equally oddball producer and Gabe’s brother Rich (James Marsden) and egged on to make even bolder and bigger shows by Gabe to keep the station going financially as Alice burns up her winnings. But where is all this leading to and is it good for her mental health?

Alice Klieg: …..”This morning I woke up and there was a p*bic hair on my pillow shaped like a question mark. And it really got me thinking of unanswered questions, like all the times in my life when I was supposed to feel something but I felt nothing and all the other times in my life where i wasn’t supposed to feel anything but I felt too much and the people around me weren’t really ready for all of my feelings…”

I quite enjoyed this and fair play for it being made by Wiig and Piven, a movie very much aimed at women of the same age and ilk of the people who made it. That saying as a bloke of middle years I also got it and found it a positive and original film experience and very funny at times. It’s a great little script and with just about everyone in the public eye using depression and mental illness to boost their career these days it’s very topical.

Wiig is a real comic tour de force in the lead and brings pathos to it when required. We all know someone like this and thank our Lord it’s not us as we know we are never too far away from that madness ourselves, the films appeal. I have no idea how remotely accurate this is on the subject of BPD but nothing is in Hollywood so it goes down quite well. It treats mental illness with heart and so no bad thing. It’s always a great source of comedy though. It’s just different.

The rest of the strong cast just sit back and, like her TV show, let Wiig own the film as she does her thing in the spotlight. She is a pretty decent actor to be fair. Where it does slightly breakdown is she is the film and no one else is padded out much to contest her central performance. But it is original and funny and so I am writing this review simply to let you know there are films out there that are different and this well worth a watch, if you can find it. I got it off Amazon Marketplace for a couple of quid so start there.